Having a plan isn’t the same as being prepared, but some newly updated research offers another reminder that planning is essential to successful retirement.

The nonpartisan nonprofit Employee Benefit Research Institute has consistent evidence that people who assess their retirement needs are more confident in their ability to retire successfully – even though they tend to raise their saving goals as a result.

“There’s something to be said for knowing the size and extent of what was previously unknown, particularly when it comes to setting a financial goal as complex as planning for retirement can seem,” Nevin Adams, a director for EBRI, wrote in a weblog. “If the annual publication of the RCS (Retirement Confidence Survey) does no more than remind individuals of the importance of taking the time to do so, then it’s not only good information – it’s information that does some good.”

Overall, the latest survey reflects continued fallout from the 2008 financial collapse and the Great Recession: Just 14% of Americans are confident they’ll have enough money to retire comfortably.

The degree of optimism varies widely by individual circumstances. For instance, there’s greater confidence among those with higher household income as well as those with less debt, more savings and investments, advanced education and better health.

About two-thirds of workers say they are behind schedule in planning and saving for retirement, according to the 2012 survey. That 67% is up from the 55% in 2005 who said they felt behind.

Considering that nearly half of the retirees say they left the workforce unexpectedly because of downsizing or problems with their health, getting a head start on providing for retirement becomes even more crucial. Still, 56% of workers say neither they nor their spouse has ever tried to figure out how much savings they need to retire.

When the survey asked workers and retirees to identify the most pressing financial issues Americans face, just 2% named a longer-term issue such as saving or retirement planning. The most frequent responses, in descending order:

“Fortunately, our clients are among the minority who realize the importance of putting money away for retirement and have the discipline and wherewithal to do so,” said Art Rothschild, vice president at Landaas & Company.

A majority of workers figure they need more than $250,000 saved to retire… 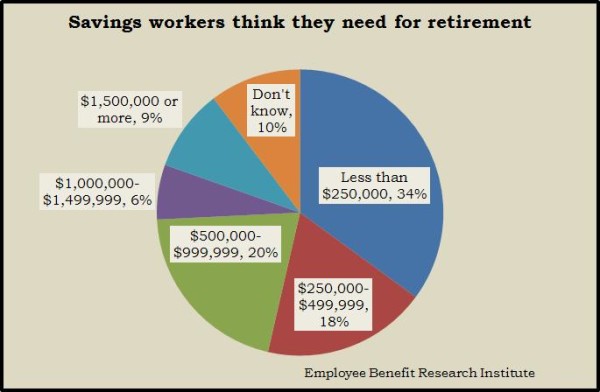 …but only 10% say they have that much set aside. 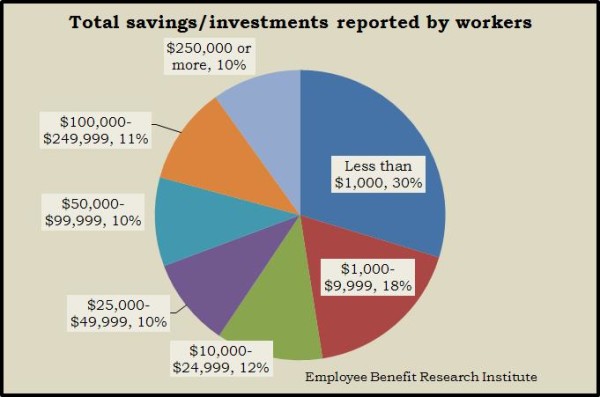