For What It’s Worth: Nickel and dime 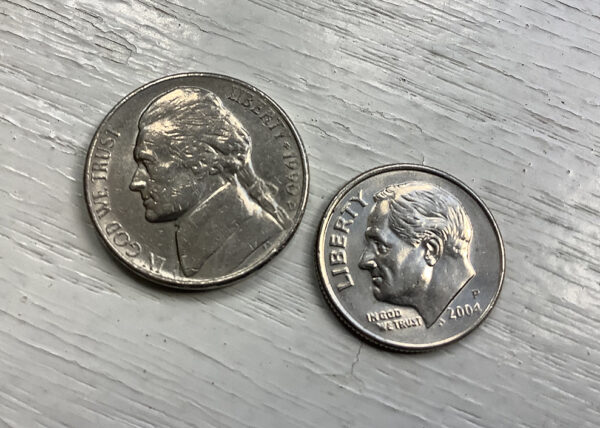 Except for rare coins, lesser bits of money tend to get shortchanged not only in our finances but also in our language. Consider such expressions as penny ante, for instance, the lowest of stakes, and bad penny, something you can’t get rid of.

Even nickels and dimes have become clumped together as derogatory references.

A nickel-and-dime operation is a small-time outfit, cheap, petty. To nickel-and-dime a customer is to jack up costs by adding lots of fees for little extras. The expression dates back to the late 19th century referring to five-and-ten-cent stores.

But there is also a sense of nickel-and-diming your way to success through incremental efforts and not losing sight of the cumulative effect of little steps along the way. Think of the tortoise outdistancing the hare.

Nickel refers to part of the material used to make five-cent coins. Actually, both nickels and dimes are made of cupronickel. “Cupro” refers to copper, which accounts for about 75% of the alloy. “Nickel” comes from a German word meaning goblin, demon or devil because the niccolite ore looks deceptively like it would contain copper.

Dime is a Middle English derivation of an Old French word originating in Latin meaning one-tenth.

Dimes figure their way into another expression of low value, dime a dozen. If that is all something is worth, it suggests it is common, easily obtained and exists in abundance. Dime a dozen remains popular because of its alliteration. It’s fun to say. Like chump change, which refers to the few coins worthy of a chump, a fool, literally a block of wood.