The Commerce Department reported a 1.2% rise in manufacturing orders in August, the 15th increase in 16 months. Gains were led by a high demand in commercial aircraft and parts, but even excluding transportation equipment, orders rose 0.5% from July and were up 14.2% from August 2020. Core capital goods orders, a proxy for business investments, rose 0.6% for the month and were up 164% from the year before.

The U.S. trade deficit grew 4.4% in August to a record gap of $73.3 billion. The deficit, which detracts from gross domestic product, resulted from the value of imports rising at a faster rate than exports, a sign that the U.S. economy is recovering quicker from the pandemic than those of its trading partners. Through the first eight months of 2021, the trade gap grew 33.7% from the year before as imports rose by 21.2% and exports increased by 17.5%.

The U.S. services sector continued expanding in September, up slightly from its August pace, according to the Institute for Supply Management. The trade group’s services index showed the 16th consecutive month of growth, expanding all but two of the latest 140 months. Purchase managers surveyed for the index repeated ongoing concerns for constraints they say are affecting supply continuity, including uneven access to materials, labor and logistics.

The four-week moving average for initial unemployment claims rose for the second week in a row but remained below the 54-year average. Average claims were at 344,000, up 64% from a 52-year low just before the pandemic. The Labor Department said 4.2 million Americans were receiving unemployment benefits in total in the latest week, down 17% from the week before as temporary pandemic-related assistance programs phase out.

The Federal Reserve reported that consumer credit card debt rose in August for the fourth month in a row. With consumer spending driving about 70% of U.S. economic activity, credit card debt can signal consumers’ ability and willingness to spend. Since peaking just before the pandemic, such debt is still down $96 billion or 8.7%, unadjusted for inflation. Credit card debt in August was about at the level it stood four years ago. It took almost 10 years for credit card debt to recover from the Great Recession.

Employers added 194,000 jobs in September, down from the 561,000 average monthly gain so far in 2021. The Bureau of Labor Statistics reported that payroll jobs remained 5 million or 3.3% behind the level just before the pandemic. Transportation-and-warehousing was the only major employment category that had more jobs than before February 2020. A separate household survey showed the unemployment rate dropped to 4.8% September, down from the record 14.8% in April 2020 but still up from a 52-year low of 3.5% in February 2020. One sign that the delta variant of COVID-19 was causing some hesitancy among potential job seekers was a drop in re-entrants to the labor force, down 198,000 individuals (8%) from August. 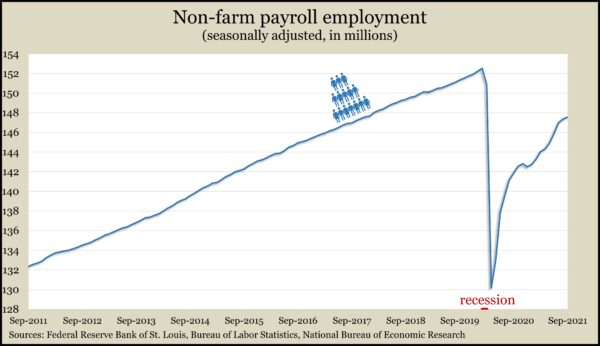