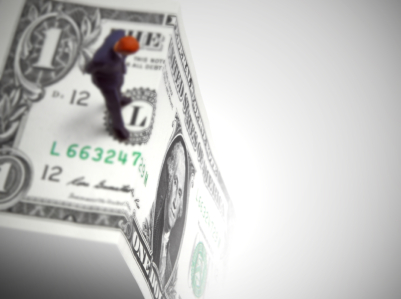 I was a cocksure teenager who had just mastered the skill of waterskiing. I was so certain that I could glide across any water surface in any condition that I convinced my father to stop the boat and let me take a whirl.

The trouble was we were on Lake Michigan.

The shock of the frigid water seized me the instant I plunged in. I couldn’t breathe. My limbs went numb. I panicked. My life passed before my eyes.

Thus I learned as an adolescent that as helpful as it is to have confidence, it can get you in over your head.

Americans’ retirement confidence nudged up this year, according to a 28th annual survey by the nonprofit Employee Benefit Research Institute. Nearly two-thirds (64%) of workers said they’re confident that they and their spouse will have enough money to live comfortably in retirement. That’s up from 60% in 2017 and a recent low of 55% in 2014. It ties for the highest level of retirement confidence since before the Great Recession.

The trouble is most of us are ill-prepared for retirement. According to a representative sample of workers surveyed for the Retirement Confidence Survey:

And it’s not just money. Only 46% of the survey respondents said they have even thought about what they will do in retirement. In other words, 54% have not considered how they’ll spend their golden years! 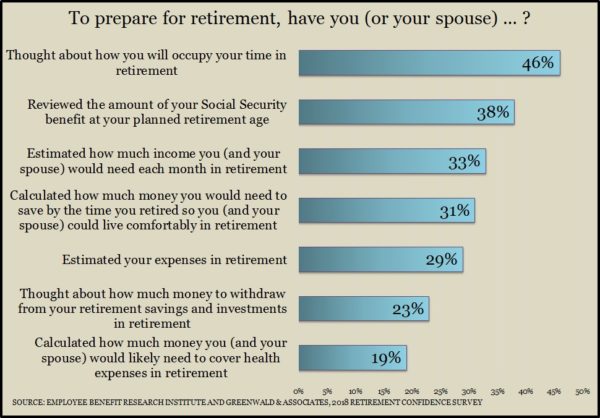 So why are workers so confident of their retirement when they’ve done so little to prepare for it? It could be a case of ignorant bliss. A 17-year low in unemployment probably helps, as well as the second-longest bull market in modern history.

Still, as my impulsive leap into Lake Michigan taught me, a little forethought could go a long way.

According to the survey, of those workers who had a retirement savings plan, 84% said they have personally saved for retirement, as opposed to 13% who aren’t in a plan.

Just talking about retirement can make you more conscientious about working toward it. The good news is that there are resources to help envision retirement. For starters:

My mother laughed whenever she recalled the look on my face as I gasped to be rescued from the chilly trap of Lake Michigan. Sometimes she would bring up the episode out of nowhere, as if to remind me of the hazards of being too sure of myself.

Of course, I survived my youthful impetuosity. Such mistakes are best made when we are young. But we cannot afford to be rash about retirement. It’s good to be confident, but it’s wise to test the waters before we jump in.