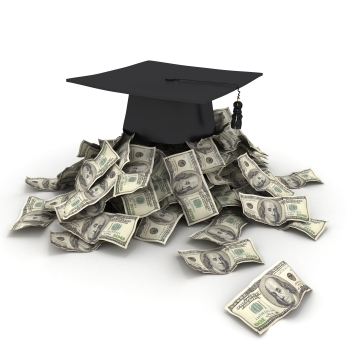 I am looking forward to a trip in May: A long weekend in Colorado that has been in the works for more than 20 years. Our daughter is graduating from college.

We’ll be celebrating her hard work, her sacrifice, her choices, her victories over obstacles and setbacks. I am proud of her. And it’s not vainglory, because I have had little to do with what she is achieving.

As with her older sister, my wife and I have provided her with limited financial assistance. That’s because a) We want our children to have some skin in the game, and b) We’ve needed to save for our retirement.

Through the years, we have set aside investments for our daughters’ college expenses through a tax-advantaged 529 plan. Whatever money those funds accumulated was theirs for college. They made up the difference through scholarships, grants, on- and off-campus employment—and, grudgingly, student loans.

College has presented a serious lesson in what we have hoped to instill in our children about personal finances: You have more opportunities than you have resources, so you must sort out your priorities and plan accordingly.

If we had our druthers, we’d have let them pay for all their schooling, which is pretty much what we did. We’ve wanted them to have pride of ownership in their accomplishments and the sacrifices involved. But, we didn’t want a tower of debt to limit their options after college.

When I embarked on higher education more than 40 years ago, college was much more affordable.

Annual tuition, room and board at a four-year university averaged $2,577 when I began college, according to the National Center for Education Statistics. That compares with $26,132 when my daughter started four years ago. Working minimum wage jobs, it would have taken me 1,120 hours—28 full-time weeks—to gross enough to pay for a year of college, as opposed to 90 full weeks for my daughter.

The Federal Reserve reports that half of young adults who went to college borrowed money to do so. Their debt typically ranges between $20,000 and $25,000, and of those who are making payments, average monthly installments are between $200 and $300.

As Paige Radke has explained, student debt is holding back not only young adults in their early working years but also their parents, who in some cases are compromising their retirement plans and assets. A recent report in USA Today showed that more than half of American adults in their early 30s still received financial support from their parents.

Saving for college has helped my wife and me learn to save for retirement, too. Both require a plan that’s better implemented over time. Both demand making priorities and having discipline. Both involve balancing investments so that some of the money is reasonably risked for growth while enough is safely available for near-term expenses.

Although we could have been putting more money into a fancier house, a nicer car, newer gadgets, grander vacations and so on, we decided that the girls’ education was a crucial investment. And yes, especially when we were younger parents, contributions to our retirement accounts were diminished by the checks we sent to their college funds.

We couldn’t afford to simultaneously max out our 401(k) contributions and build their education savings. We opted for higher property taxes to live near reputable public schools. We minimized meals out and relied on hand-me-downs (kids’ clothes and toys, furniture, appliances) to afford music lessons, extracurricular sports and educational excursions.

I’m sure we could have planned it better. Had we started saving for the girls’ education sooner or set aside more, their student loans—though less onerous than average—would be even lower. Perhaps we could have invested more wisely, taking greater risk early on, letting up on the gas closer to the end.

At the same time, I’m grateful that we didn’t let over-analysis, second-guessing or a quest for perfection get in our way of just squirreling away money for the future. I have the added benefit now of working at a place where working-class factory workers and teachers have become millionaires by living within their means, investing for tomorrow and trusting professional advisors.

Also, I’m seeing how biweekly paycheck deductions and annual contributions and sensible allocations can accumulate. And, I’m feeling how quickly time passes from a baby birth to her—as they call it—commencement. After this trip in May, two of our daughters will have college degrees. A couple of weeks later, our youngest graduates from high school.