Inflation can cut both ways for retirees 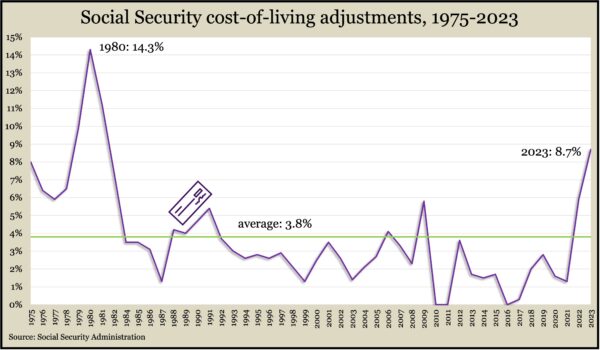 The good news about the highest inflation in 40 years is generous benefits boosts to retirees and those saving for retirement.

“To be clear, there are  plenty of things to be upset about as you look at the inflation picture,” Kyle Tetting said during a recent Money Talk Podcast. “You go to the grocery store, you fill up your tank, you’re going to be upset. But of course, it’s worth pointing out that we get some benefits to that as well.”

The most far-reaching benefit with the most immediate impact is for the 65 million retirees receiving Social Security payments. Their monthly checks will get an 8.7% increase beginning in January, the biggest raise since 1981.

Social Security’s annual cost-of-living adjustment is based on a version of the federal Consumer Price Index, which measured overall inflation at 9.1% in June, the highest since 1981. Since then, the rate dropped three months in a row to 8.2% in September. With the Federal Reserve Board set on lowering inflation further, the 8.7% Social Security adjustment might exceed the inflation rate in 2023, Steve Giles explained in the podcast.

“That increase in monthly income from Social Security is going to have some real benefits as inflation continues to taper farther into next year,” Steve said.

For the average retired couple receiving Social Security, the 2023 raise will mean an extra $238 a month, bringing the average monthly benefit to $2,972.

Social Security is making other inflation adjustments, including raising the income limits on how much retirees receiving benefits may earn without forfeiting up to half of their government checks.

Those still saving for retirement also benefit from adjustments to high inflation. The Internal Revenue Service said it’s increasing how much Americans can contribute to tax-advantaged retirement accounts, including 401(k)s and IRAs.

“Inflation can cut both ways,” Steve said. “As much as we see higher costs of goods and services out there, we’re getting rewarded in higher contribution amounts on our retirement savings plans.”

For IRAs and Roth IRAs, the maximum contribution rises 8% next year to $6,500. The catch-up payment for workers 50 and older will remain at $1,000 because it’s not subject to cost-of-living adjustments.

Also, the IRS is raising the income limits for a number of benefits, including the eligibility to contribute to Roth IRAs.

“A lot of people are restricted in saving in Roth accounts because their incomes might be too high,” Steve explained. “Those tax bracket income restrictions have also gone up.”

High inflation also will noticeably bump up the thresholds at which individual income is taxed at different marginal rates. For instance, a married couple’s income wouldn’t reach the 22% bracket until $89,450 in 2023, 7% or $5,899 higher than for 2022.

“It’s essentially a tax cut because you can earn more money in a lower tax bracket,” Kyle said. “I think it’s going to be lost in all of the madness that is the conversation about inflation, but there are some significant benefits to individuals who are paying taxes – which is just about all of us – that maybe we’re not so quick to realize.”

Not a Landaas & Company client yet? Click here to learn more.
More information and insight from Money Talk
Money Talk Videos
Follow us on Twitter.
Landaas newsletter subscribers return to the newsletter via e-mail.