Emergency lessons from a 40-year-old deuce 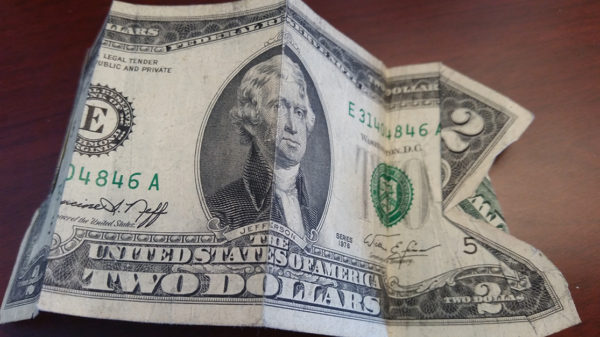 A numismatic anniversary has reminded me of a long-forgotten gift from my father. Now that I think of it, the gift is worth remembering. It speaks to the wisdom of providing for emergencies.

About the time I left home for college, Dad handed me a $2 bill. He advised me to keep it tucked in my wallet. That way, he said, if I ever needed money, I could remember that the $2 was there to help.

April marked the 42nd anniversary of the U.S. government’s resurrection of the $2 bill following a 10-year hiatus. Long considered awkward and even unlucky, the deuce is the most overlooked of American currency.

In fact, I had to make sure I still had mine. Even as I felt for it in a nether region of my billfold, I wondered whether it was there. Sure enough, I had it – beneath my lifetime membership card for Madison’s Memorial Union and a door key that no longer works for a friend’s business.

That Thomas Jefferson note has been my companion for more than 40 years. It traveled with me to Asia, Europe, Africa and back and forth across the continental U.S. It saw me through college, graduate school and eight jobs in five cities. It was with me when I got married and when each of our daughters was born.

Dad had some genius to his gesture. Out of sight, out of mind, the tucked-away bill was never easy to access. That way, I wouldn’t feel inclined to spend it – if I even remembered it was there. But, if I ever got really desperate, that $2 was there for me.

Before you pooh-pooh those dollars of two, consider that in the late 1970s, $2 could buy a half-gallon of milk, a loaf of bread, a jar of jelly and a bunch of bananas. Now, it’s worth about 23% of what it was when Dad gave it to me, but the chance that I would need that emergency $2 also diminished with each passing year.

Dad was Depression practical. He was a veteran of the Civilian Conservation Corps and World War II, a Boy Scout leader who could make do with anything. He was always inventing little ways to improve the lives of his offspring. For years, at Dad’s insistence, I kept an ice cream pail of sand in my car for snow emergencies. He collected jars of discarded bolts and screws and washers and nuts for me – because you never knew when you’d need one. He made frequent gifts of WD-40.

What strikes me now about that $2 bill in my wallet is the value of being prepared for an emergency. If you know you can cover a worst-case scenario, you have one less worry weighing you down. You can enjoy the here and now a little better. You’re afforded the luxury of working toward the future without dreading it.

It impressed me in recent Money Talk Videos that both Marc Amateis and Steve Giles mentioned the prudence of having a reasonable stash of cash. In his video on five things to do when stocks aren’t cheap, Marc talked about retirees converting stock gains to a safe cushion that can cover their near-term spending needs. When Steve explained why to be patient holding bonds as interest rates rise, he talked about how cash can provide a reserve that lets investors trust their asset allocations amid volatile markets.

There’s plenty of advice on household emergency funds, and it can apply to investors at any stage. Here are some highlights:

A $2 bill was a quaint way for my dad to instill in me a sense of protecting against the unexpected. It’s like the lone bullet that Deputy Fife was allowed to carry in his shirt pocket in “The Andy Griffith Show.” There’s only one, and it’s not convenient, so you better use it judiciously. That forces discipline and resourcefulness while also fostering peace of mind.

Learn more
You need a budget, by Tom Pappenfus (including a worksheet)
$2 Note Fact Sheet, from the Bureau of Engraving and Printing, U.S. Treasury Department
How cash fits into your portfolio, a Money Talk Video with Brian Kilb
Start Your Financial Road Trip With an Emergency Fund, from the Financial Industry Regulatory Authority
Save for a Rainy Day, from the Securities and Exchange Commission
Counting on Rainy Days, by Joel Dresang