Recession’s not over till the NBER sings

We know the U.S. economy plunged into recession in February 2020. But at what point we bottomed out and the economy started expanding again will take some time to determine.

The official call on such turning points comes from the National Bureau of Economic Research (NBER), a private nonpartisan organization made up of a network of 1,550 academic economists. Formed a century ago over a quarrel between two economists, the bureau has determined the dates for every U.S. recession since 1854.

Bureau economists involved in business cycle information are painstaking when pronouncing the end of a recession.

Over the past five downturns, they averaged 15 months between when the recession was over and when they said so. On three of those occasions — 1980, 1991 and 2001, the lag between the turning point and the bureau’s declaration was longer than the recession itself. 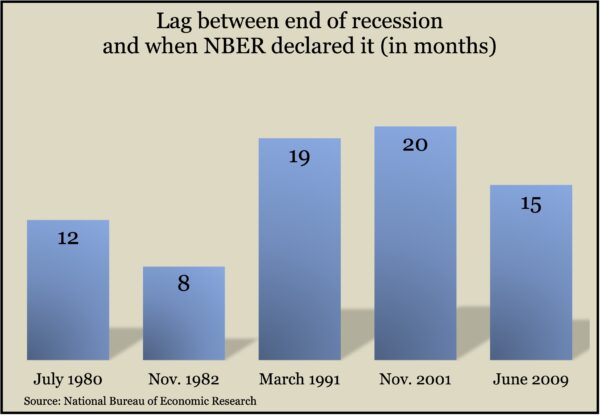 Chances are, the bureau will be quicker about announcing the official trough of the 2020 recession. Its panel took only four months to declare the beginning of the contraction, just half the average time it took over the five previous downturns and the fastest decision in more than 40 years of announcements. The latest statement, issued June 8, 2020, noted the extraordinary circumstances of the global COVID-19 pandemic and abrupt widespread shutdowns:

“The unprecedented magnitude of the decline in employment and production, and its broad reach across the entire economy, warrants the designation of this episode as a recession, even if it turns out to be briefer than earlier contractions.”

In determining economic turning points, NBER economists try to pinpoint the trough of the contraction. They ponder scads of various government data, which tend to be updated and revised over time, adding to the length of the process.

Based on announcements of past troughs, the economists wait to feel sure not only that they have conclusive figures but that the economy is recovering enough not to slip back into contraction soon.

“A recession is a period of falling economic activity spread across the economy, lasting more than a few months, normally visible in real GDP, real income, employment, industrial production, and wholesale-retail sales,” the NBER said in its September 2010 announcement that the Great Recession ended in June 2009. “The trough marks the end of the declining phase and the start of the rising phase of the business cycle.”

Identifying when the economy turned around last year shouldn’t be too difficult. A glance at measures such as inflation-adjusted gross domestic product and real gross domestic income shows directions pivot in the second quarter of 2020.

Figures for payroll employment, industrial production, wholesale sales, retail sales and more bottomed out in April 2020. If that’s when the NBER eventually says the recession ended, it would mark the briefest contraction in U.S. history.

“Across an investor’s lifetime, they’ll see many market cycles,” Kyle Tetting notes. “The exact timing of the start or finish of a recession is nice to know, but it does little to inform the investment process. Instead, investors with a long-term view can rely on balance to smooth the ebbs and flows of the economic cycle and avoid needing to predict every peak and trough that even the professional economists can’t call until many months after.”