For What It’s Worth: Squirreling Away 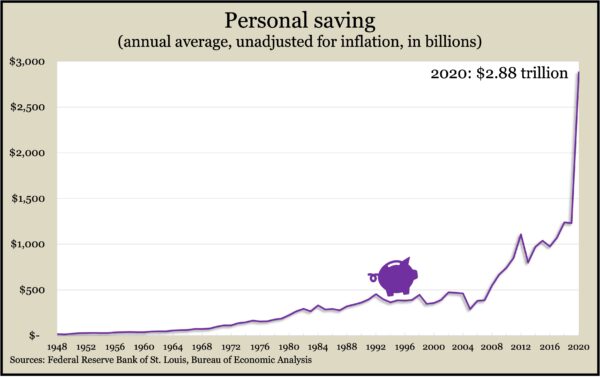 One hope for the COVID-battered U.S. economy is that pent-up demand and cash-laden consumers will stoke a relatively rapid recovery once pandemic restrictions let up.

In 2020, consumers socked away a record $2.88 trillion, according to the Bureau of Economic Analysis. That’s more than twice the previous peak of $1.24 trillion in 2018. And though the rate has been leveling off since mid-2020, it remains near all-time highs.

Much of the slang for personal saving comes from pretty straightforward origins. For instance:

Squirreling away relates to the practice of bushy-tailed rodents storing away nuts and seeds for the winter. Some squirrels engage in scatter hoarding, through which they diversify the locations of their pantries.

Socking away calls up images of cash stuffed into hosiery and concealed in a dresser drawer. (I am not aware of a verbal phrase referring to hiding money under your mattress, but I have found the term “mattress money.”)

Salting away is a more curious expression, relating to food preservation. You can read about it here.

Stashing away is another common saying. (I’m not sure why all these start with “s.”) An online dictionary I trust dates “stash” from the late 1700s, origins unknown. But a folksy reference book I own, the second edition of the Morris Dictionary of Word and Phrase Origins, suggests “stash” is a mash-up of “store” and “cache.”

According to William and Mary Morris, “stash” was originally used by “vagabonds or hobos” for hiding something — “usually improper or illegal” — for future use. The negative connotation explains why stash also became a name for a secret personal supply of illegal drugs. Even in that sense, it keeps the meanings of hoarding and hiding.

Whatever you call it, the setting aside of money creates what economists call the paradox of thrift. On one hand, saving offers consumers security and funds long-term investments.

But the U.S. economy is driven mostly by consumer spending. So, in the short-term, unearthing cash from sock drawers and mattress pads is good for boosting economic growth.

Learn more
For What It’s Worth: Salting away
Spend to save the economy, by Joel Dresang

Store sales rose again in September, further signs of a consumer-driven economic expansion that has not affected al… twitter.com/i/web/status/1…

Our annual #Investment Outlook Seminar is video only again this year. Updating clients and other #investors and… twitter.com/i/web/status/1…