Spend to save the economy 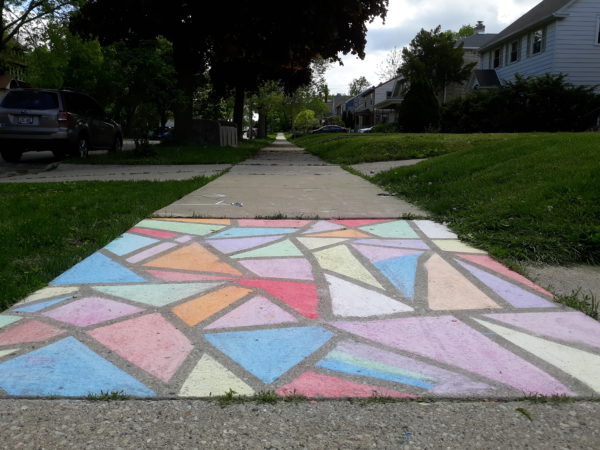 An email from the credit union has called me to duty. The notification says the Economic Impact Payment is in our checking account. Now I have to spend it.

Spending is not my impulse. Unlike a kid in a candy store when I reap a windfall, I feel like a conflicted contestant on “Let’s Make a Deal,” puzzling over whether to settle with the winnings in hand or to trade for whatever’s concealed behind the curtain by Carol Merrill.

Blame it on growing up in a seven-child middle-class family with parents raised in the Depression. Compounding my frugalness, I married a woman from the same backdrop. We’re cheap dates for each other.

She let me keep the same bowl for my morning oatmeal for 33 years. It was so cracked and chipped that it rattled. Last week, the bowl finally fell apart in my hands while I was washing it. I replaced it with a remnant from a set of dinnerware we got 30 years ago.

But the apoplectic U.S. economy prefers shoppers. Consumer spending is the nation’s lifeblood—accounting for nearly 70% of gross domestic product. In March and April, such spending plummeted a staggering $2.9 trillion, down an unprecedented 19.6% in two months. Since January, retail sales—a quarter of all consumer spending—plunged an unheard-of $125.7 billion or 23.7%.

The economy’s reliance on consumer spending is exactly why Congress included provisions to put money in citizens’ pockets as part of the $2.2 trillion rescue package it passed in March. Consumer spending is the surefire antidote to the economic knockdown delivered by the COVID-19 pandemic.

That’s how $2,400 got from the U.S. Treasury to our checking account at the credit union. Now, it’s our patriotic duty to put that money to work.

We are fortunate. My wife and I have continued working through the pandemic so far. We haven’t had our jobs eliminated or hours cut or pay reduced. Unlike many people we know (and even more we don’t), we don’t need our government payments to cover rent or groceries or to forestall debt collectors.

Still, I recognize that I’m not the only one who needs spurring to spend. America has grown more reluctant to spend money—especially in times of general economic constraint.

Adjusted for inflation and seasonality, the annual growth rate of personal spending peaked at 4.7% in June 2005. Then, it sank to -2.3% near the end of the Great Recession. And it never recovered. It reached 3.2% in February 2020 and in April collapsed below -17%. At the same time, our tendency to save is rising. 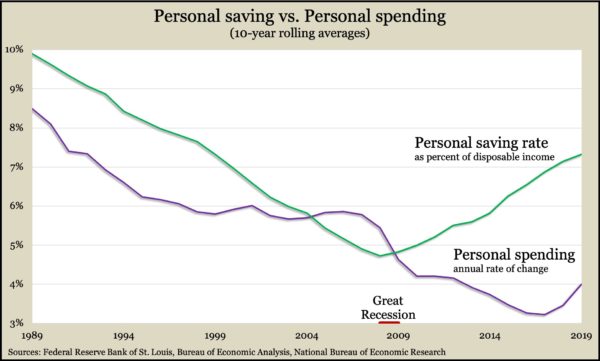 Part of our hesitation to spend is demographic; part is defensive.

Baby boomers are retiring in droves, and research by the Bureau of Labor Statistics shows spending slows once we retire. Generally, expenses fall during retirement, but also individuals can get stingy if they worry about spending through the savings meant to last the rest of their lives. Having a plan, including a budget, provides retirees the confidence to relax tight fists and spend within their means.

“I think the single most important thing we do really is help our clients realize what their money is for,” Art Rothschild said in a Money Talk Video. “They’ve worked their entire lives to build up a nest egg that’ll hopefully sustain them in retirement, and there’s nothing more important than talking to them about how much they can spend.”

Also, it’s human nature to hunker down when times get tough.

For many, the Great Recession was a reveille, rousing us to spend less and save more. The relative severity of the downturn left an impact. Inflation-adjusted retail spending took more than six years to recover from the start of the Great Recession, compared to just seven months in the previous recession in 2001.

Difficult times call for sacrifice. Already, this pandemic has created disorder—financially, physically and socially. Between the disruptions so far and the uncertainties ahead, we face unparalleled times. But we know that the economy relies on consumer spending, and it won’t recover without it.

Because we can afford it, I’m resolving to spend.

So far, we have been trying to help support local businesses that we value. Normally we don’t dine out much, but now we get take-out from nearby restaurants we appreciate. Likewise, we’ve picked up orders from a local brewery and a coffee roaster. We have been buying gift certificates from a business that some friends opened in January before they had to shut it down in March. We also have donated to local charities that support shut-in families in need of food and social services.

Like many Americans, we’re spending money at local garden centers, too. We dug up our front yard as an outdoor family project, and we’re expanding a flower garden both for occupational therapy and as a shout-out to neighbors.

The $2,400 or more that we plan to spend doesn’t amount to much in the grand scheme of things. But, as with the stained-glass chalk art on sidewalks and the children’s artwork I see in windows on my many quarantine walks, spending strategically helps me feel better. I know I’m doing a little something. And if more people like me get off the dime, maybe it can add up to make a difference. 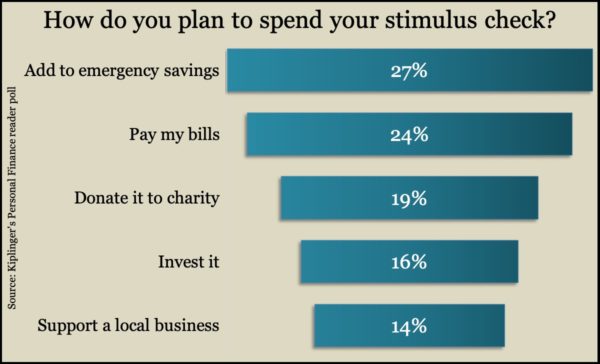 Learn more
Economic Impact Payments, information from the Internal Revenue Service
Safe investment withdrawals for retirees, a Money Talk Video with Art Rothschild
Retirement: Thinking about spending, by Joel Dresang
How to handle a financial windfall, a Money Talk Video with Isabelle Wiemero
For What It’s Worth: Windfall, how the term “windfall” come about