No major reports or releases

The Commerce Department said orders for durable goods declined in August for the second month in a row, reaching a year-to-year increase of 11%. The indicator for manufacturing demand dipped largely because of a downturn in commercial aircraft orders. Excluding transportation equipment, orders rose 0.2% from July and were 8% above their level in August 2021. Core capital goods orders, a proxy for business investments, gained 1.3% from July and were up 10% from the year before.

The annual gain in housing prices slowed to 15.8% in July from 18% in June, the biggest one-month slide in about three decades of data, according to the S&P CoreLogic Case-Shiller home price index. Price increases decelerated for the third month in a row after reaching a record year-to-year jump of 20.6% in April. An S&P economist said housing inflation should continue to ease with more increases in mortgage interest rates. 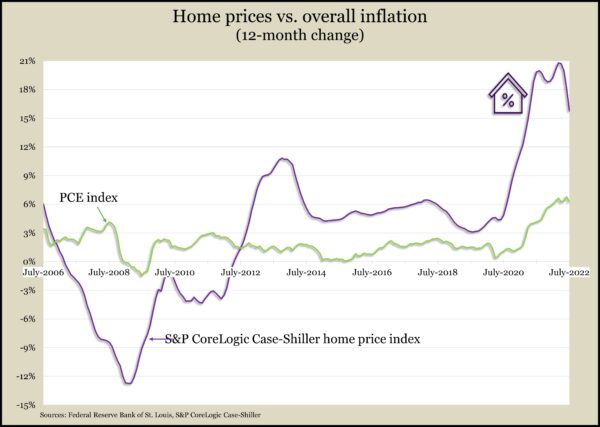 The Conference Board said its consumer confidence index rose September for the second consecutive month. The business research group said advances in jobs and wages and declines in gas prices helped consumers worry less about inflation. According to the group’s survey, purchasing intentions were down for houses but up for cars and appliances. The Conference Board said the outlook for consumer spending looked better through the end of the year but added that high inflation and rising interest rates remained obstacles and recession is still a risk.

With a forecast of mortgage rates nearing 7% in coming months, the National Association of Realtors said its pending home sales index declined 2% in August, the third setback in a row and the seventh in eight months. Contract signings for houses and condominiums dropped 24% from their level in August 2021, the trade group said. The Realtors projected 2022 sales to be fewer than 5.2 million houses, which would be down 15% from 2021. They expect another 7% decline in 2023. Meantime, the association says the median home price for 2022 should be about 10% higher than 2021 with only a 1% increase expected for 2023.

The U.S. economy contracted at an annual pace of 0.6% in the second quarter of 2022, the Bureau of Economic Analysis confirmed in a final estimate of the gross domestic product. The decline followed a 1.6% annualized dip in the first quarter. Despite the slower pace, the economy was 1.8% bigger than the year before and 3.5% larger than at the end of 2019, just before the COVID-19 pandemic. The Federal Reserve’s favorite measure of inflation showed a 6.6% increase since the second quarter of 2021, the highest since the fourth quarter of 1981. 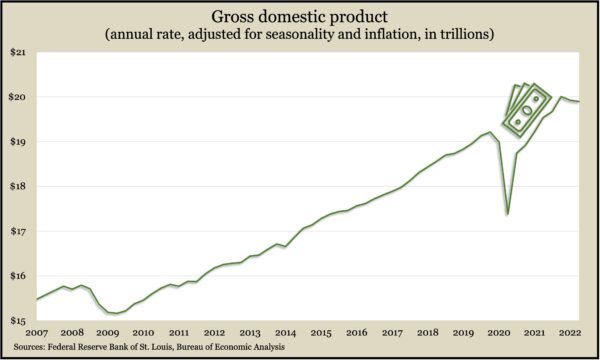 The four-week moving average for initial unemployment claims fell for the fifth week in a row, reaching its lowest point since May. At 207,000, the average was 44% below its 55-year average. The Labor Department said 1.3 million Americans were claiming unemployment compensation in the latest week, up slightly from the week before but down from more than 5 million from the year before.

By far the biggest driver of the U.S. economy, consumer spending rose 0.4% in August, while personal income advanced 0.3%. The Bureau of Economic Analysis reported that personal consumption reached 18% above its pre-pandemic peak. The personal saving rate stayed at 3.5%, the same as July, down from 9.3% in February 2020. The Fed’s favorite inflation gauge showed a 6.2% increase from August 2020 – the lowest since January but still near a 40-year high.

The University of Michigan’s consumer sentiment index rose a smidge in September, only slightly ahead of extremely low levels in the summer. The reading of 58.6 was down from 72.8 the year before. Plans to buy durable goods increased from the August survey, as did one-year projections for economic conditions. Inflation continued to dampen sentiment, but expectations for the inflation rate next year and longer were the lowest in more than a year.