As mortgage rates continued to climb, the U.S. housing industry showed signs of sputtering in August. Both housing starts and building permits remained below recent highs, according to the Commerce Department. The annual rate of housing starts rose to 1.6 million, 12% above the July pace but more than 10% below the rate in April, which was the highest since 2006. Meantime, the August pace for permits declined for the fifth month in a row, down 14% from the year before. The annual rate of housing completions was 1.3 million, around the pace in 2007, before the financial collapse. Construction of new houses remained elevated with the pace of housing under constructions surpassing 1.7 million, the most in data back to 1970. 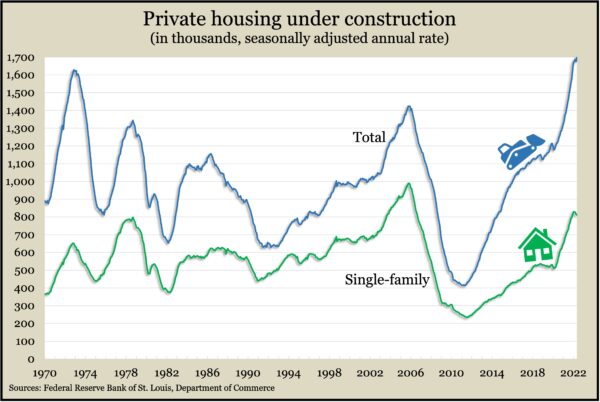 The annual rate of existing home sales fell 0.4% to 4.8 million in August, the seventh consecutive decline and 20% below the year-ago pace. The National Association of Realtors blamed rising mortgage interest rates for dampening demand. The trade group said higher financing costs also deterred potential sellers from moving. Inventories declined in August for the first time in six months but were at about half the level considered sustainable. House prices continued to rise for a record 126th consecutive month. The median sales price of $389,500 was up nearly 8% from August 2021.

The Federal Reserve Board’s policy making committee announced a unanimous agreement to increase overnight lending rates to the range of 3% to 3.25% in a continuing effort to slow down the U.S. economy to tame decades-high inflation rates. The Federal Open Market Committee issued a statement suggesting it would consider further interest rate increases to try to bring inflation closer to its long-range goal of 2%.  The Fed’s preferred measure of inflation showed a 6.3% rate in July.

Labor market conditions continued improving. The four-week moving average for initial unemployment claims declined for the fourth week in a row, reaching its lowest point in three months and falling 41% below the 55-year average. The Labor Department said total claims fell 7% from the week before to just below 1.3 million. The year before, total claims were 11.2 million.

The Conference Board’s index of leading economic indicators sank 0.3% in August, its sixth monthly decline. The index dropped 2.7% in the latest six months as opposed to a gain of 1.7% in the previous six months. The reversal prompted the business research group to say that because of tightening monetary policies by the Federal Reserve, the U.S. could slide into recession “in the coming quarters.”