Higher mortgage rates may be dampening demand for home buying, but house prices continued to rise near historic rates. According to the S&P CoreLogic Case-Shiller national index, prices rose 18% in June from the year before. That was a slowdown from nearly 20% in May and a record 21% in March. A spokesperson for the longstanding measure said despite three months of decelerated price increases, the market remained “robust” with double-digit increases reported for each of the 20 cities in the composite index.

The Conference Board reported that its consumer confidence index improved in August for the first time in four months. The business research group said concerns about inflation remained high, though they had declined a bit. Expectations rose from a nine-year low in June. Consumers’ attitudes toward current conditions gained for the first time in five months. Intentions to make major purchases and take vacations improved. The Conference Board said consumers remained squeamish about inflation and rising interest rates.

The labor market showed strength in July with nearly twice the number of job openings as there were unemployed job seekers. The Bureau of Labor Statistics said employers had 11.2 million openings in July, vs. a separate report earlier counting about 5.7 million people as unemployed in July. Not every job seeker would qualify for every opening, but the comparison suggests how much supply and demand are out of balance. July marked the first time in four months that openings increased. The number of workers quitting their jobs — a measure of employee confidence — declined for the fourth month in a row but stayed close to the record high of 4.5 million quits last November. 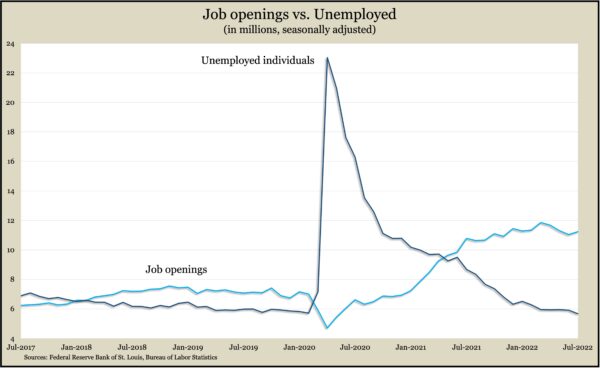 The four-week moving average for initial unemployment claims fell for only the second time in the 21 weeks since hitting an all-time low in early April. At 241,500 new applications, the average was 35% below the 55-year average, according to Labor Department data. In total, 1.4 million Americans claimed unemployment compensation in the latest week, down less than 1% from the week before and down from more than 12 million the year before.

The Bureau of Labor Statistics said worker productivity sank at an annual rate of 4.1% in the second quarter, revised from an initial estimate of a 4.6% decline. The annual rate for output fell 1.4%, revised from a decline of 2.1%. The pace of hours worked rose 2.7%. Compared to the second quarter of 2021, productivity dropped 2.4%, the biggest year-to-year dip in data going back to 1948. In the last year, unit labor costs — which measure worker compensation against productivity — rose 9.3%, the most since 1982.

The manufacturing sector expanded in August at the same pace as July, which was the weakest in two years. Still, the Institute for Supply Management reported that manufacturers broadly and collectively grew for the 27th month in a row. The trade group said its surveys of purchasing managers indicated “at least a slight easing of supply chain congestion.” Based on past relationships between the index and gross domestic product, the group said the overall economy was expanding at a 1.4% annual growth rate.

U.S. employers continued adding jobs in August, and the unemployment rate ticked up as more job seekers entered the pool from the sidelines. The Bureau of Labor Statistics said payrolls expanded by 315,000 jobs in August, an addition of 5.8 million in the last year, pushing employment 240,000 positions past the mark in February 2020, just before the pandemic. The unemployment rate rose to 3.7%, up from 3.5% in July, which was also the level in February 2020 and the lowest since 1969. The government report showed 344,000 more workers looking for jobs in August at the same time that 361,000 fewer people said they wanted work but weren’t actively looking. 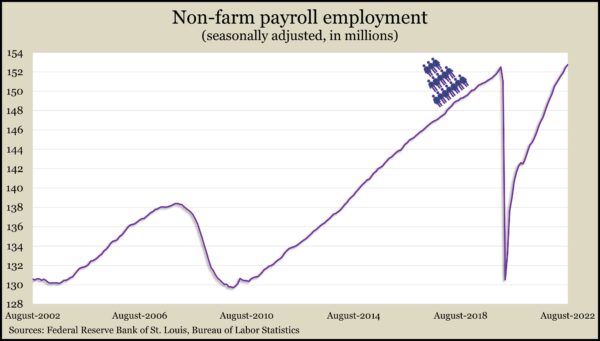 Despite an increase in orders for cars and parts, U.S. factory orders declined in July for the first time in 10 months. Orders were down 1% from June and down 1.1% excluding the volatile transportation category. Since July 2021, total orders rose 13%; excluding transportation, orders rose 12.5%. Core capital goods orders, considered a proxy for business investments, rose 0.3% for the month and 10% from July 2021.