Inflation remained relatively high in August, though it continued to recede from recent levels. The Bureau of Labor Statistics said the Consumer Price Index added 0.1% from July. That followed no change in July but was below the 12-month average of 0.7%. The critical year-to-year inflation rate was 8.3%, down from 8.5% in July and a 40-year high of 9.1% in June. Gasoline prices fell 11% for the month, offsetting broad gains including shelter, medical care and household furnishings. Gas was up 26% from August 2021. Excluding volatile food and energy prices, the core CPI rose 0.6% in August. Year to year, the core CPI was up 6.3%, up from 5.9% in both June and July. 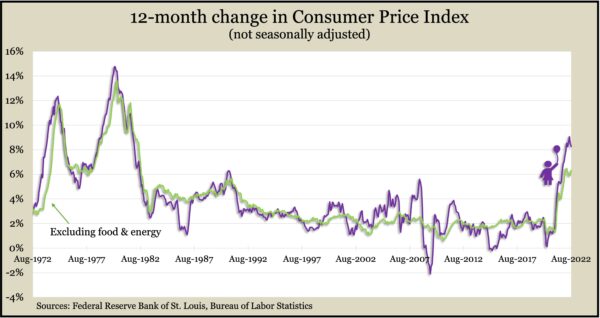 Inflation on the wholesale level also eased in August, the Bureau of Labor Statistics reported. The Producer Price Index declined for the second month in a row, led by a decrease in prices for goods, heavily influenced by a 13% drop in gasoline prices. Excluding volatile prices for foods, energy and trade, the core PPI advanced 0.2% from July. Wholesale inflation rose 8.7% from August 2021, the smallest 12-month increase in a year. The core measure rose 5.6% year to year, the weakest since June 2021.

The Commerce Department reported a 0.3% rise in retail sales in August, led by online stores, where sales grew nearly 3% from July. Sales rose at eight of the 13 major retail categories. Sales at bars and restaurants gained 1%. Gas stations led decliners with a 4% drop in revenue because of lower prices. Adjusted for inflation (the lower line in the graphic below), retail sales rose in August for the first time in four months; they were 14% ahead of where they were in February 2020, just before the pandemic. 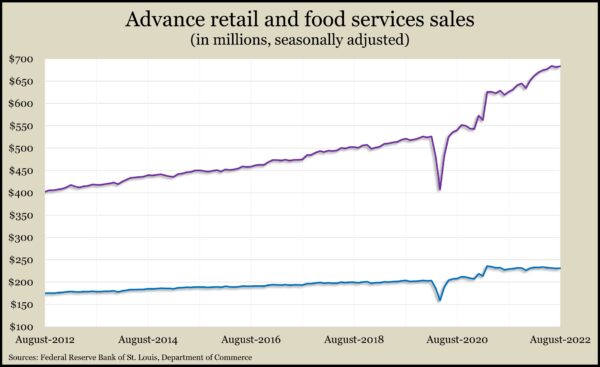 The four-week moving average for initial unemployment claims fell for the third time in four weeks., dropping to its lowest level since mid-June. According to Labor Department data, the average moved to 224,000 new applications, down from a record 5.3 million in April 2020 and 39% below the 55-year average. Just under 1.4 million Americans claimed jobless benefits in the latest week, down nearly 2% from the week before and down from more than 12 million the year before.

U.S. industrial output fell 0.2% in August, the first decline in three months. A 2.3% drop in production from utilities dragged the measure down, the Federal Reserve reported. Output from factories rose 0.1% while the mining industry registered no change. Since August 2021, overall industrial production rose nearly 4%. Capacity utilization continued to show inflation pressure. Although it declined slightly to 80% from 80.2% in July, the operating rate stayed above the 50-year average of 79.6% for the sixth month in a row.

Consumer sentiment continued improving slightly in September from “extremely low” levels earlier in the summer, the University of Michigan reported. A preliminary look at survey data suggested ongoing uncertainty over inflation, though the most optimistic outlook for long-term prospects in a year or more. Sentiments toward personal finances and big-ticket buying plans remained relatively low, a possible signal that consumers may be pulling back on spending, which probably would slow economic growth.