The Institute for Supply Management reported that its manufacturing index signaled expansion in September for the 28th month in a row, although at the slowest pace in that period. Based on surveys of purchasing managers, the index showed demand for factory goods contracting but also found supply-chain clogs easing. The trade group said the index suggests the U.S. gross domestic product grew at a 0.8% annual pace in September.

The Commerce Department said the annual rate of construction spending fell in August for the third month in a row. The rate of $1.78 trillion was 8.5% above the year-ago rate. Residential expenditures, which account for more than half of total spending, also declined for the third straight month, but was 49% higher than the level just before the COVID pandemic.

Employers reined in on job openings in August, according to the Bureau of Labor Statistics. The number of help-wanted posts declined 6% to 10.1 million openings. Demand for workers still hovered near the highest levels in more than 20 years of data, while the number of active job seekers in August (according to a separate BLS report) was near the lowest in that period. Job openings declined most in the health care field along with retail trades and other services. Hiring rates and separations were little changed from July. The number of workers quitting their jobs – a sign of worker confidence – rose for the first time in three months to 4.1 million. 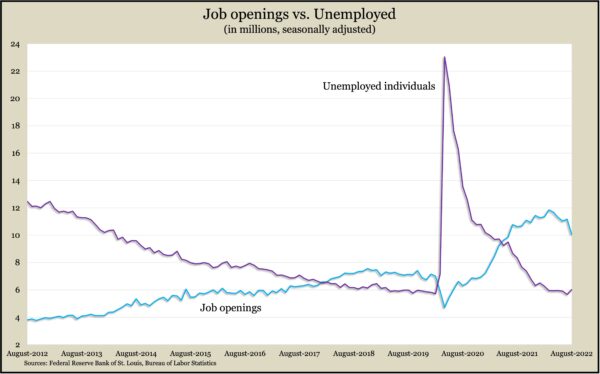 The U.S. trade deficit shrank 4.3% in August to $67.4 billion. The deficit, which detracts from gross domestic product, narrowed as the value of imports declined at a faster rate than exports. Through the first eight months of 2022, the trade gap grew 24% from the year before as imports rose by 21% and exports increased by 20%.

The U.S. services sector continued expanding in September, though at a slightly slower pace, according to the Institute for Supply Management. The pace of growth also was below the 12-month average. The trade group’s services index showed the 28th consecutive month of growth, expanding all but two of the latest 152 months. Purchase managers surveyed for the index reported improved supply chain efficiency, operating capacity, materials availability and employment.

The four-week moving average for initial unemployment claims rose for the first time in eight weeks but only because of a downward revision to the week-before numbers. Data from the Labor Department showed average new applications for jobless benefits remained 44% below the 55-year average. More than 1.2 million Americans were receiving unemployment benefits in the latest week, down 4% from the week before and down from 4.2 million the same week in 2021.

Employers added 263,000 jobs in September, the lowest addition since April 2021 and below the 420,000 average so far in 2022. The Bureau of Labor Statistics reported that payroll jobs rose 0.3% above the level just before the pandemic. Job gains were broadly spread across industries, led by leisure and hospitality, although that group remained 1.1 million or 6.7% behind its pre-pandemic level. A separate household survey showed the unemployment rate dropped to 3.5% in September, tying with July 2022 and February 2020 for the lowest mark in more than 50 years. Some 5.8 million Americans said they want to work but currently weren’t in the job market, 8% of them because of the pandemic. 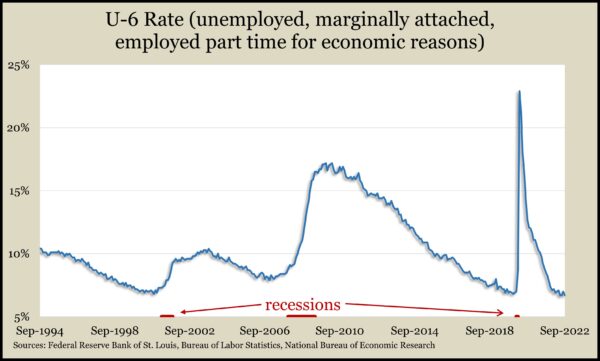