Employers reined in on job openings and hiring in August, according to the Bureau of Labor Statistics. The number of help-wanted posts declined nearly 6% from a record 11.1 million openings in July. The 10.4 million openings in August still were up 62% from the year before and compared to an average of 4.7 million openings a month in 20 years of data. Job openings declined at hotels and restaurants, where hiring also declined in August amid concerns over the delta variant of the COVID-19 virus. Job separations, including layoffs and dismissals, were on par with July, but the rate of workers quitting their jobs reached a record high, suggesting employees were confident they could find new work. 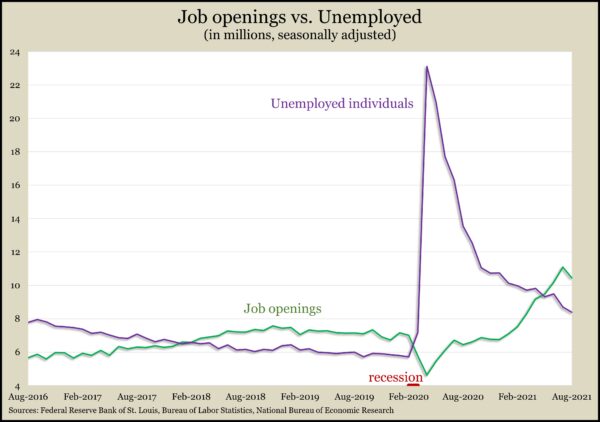 The broadest measure of inflation showed prices continued to rise in August. The Bureau of Labor Statistics said its Consumer Price Index rose 0.4% in September, with costs for shelter and food accounting for more than half the increase. Year to year, headline inflation rose 5.4%, tied with June and July for the highest since 2008. Gas prices were up 42% since September 2020; used car prices rose 24%. Excluding prices for volatile food and energy items, the core CPI rose a more moderate 0.2% from August and was up 4% from September 2020, down from a 30-year high of 4.5% in June. Based on CPI data, the Social Security Administration announced a 5.9% adjustment to benefits in 2022. That was the biggest raise for Social Security recipients since a 7.4% boost in 1982. 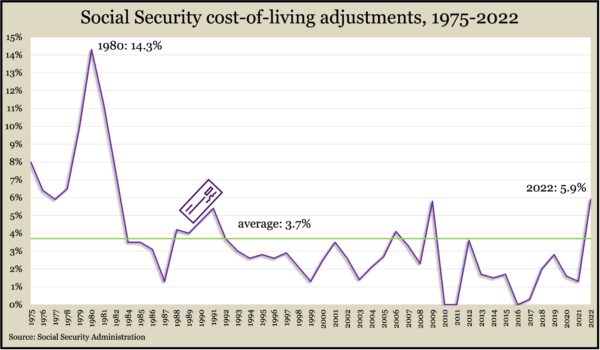 The four-week moving average for initial unemployment claims fell for the first time in three weeks to its lowest level since the pandemic. Claims averaged 334,250 in the most recent reading from the Labor Department. That was 10% below the 54-year average but still 60% above where it was just before the pandemic. Altogether, 3.6 million Americans claimed jobless benefits in the most recent week, down 13% from the week before as more than 355,000 dropped from the rolls through expiring pandemic relief programs. The year before, claims reached 24.9 million.

Inflation on the wholesale level remained elevated in September, according to the Producer Price Index. The Bureau of Labor Statistics said higher costs for goods, including a 3.9% rise in gasoline prices, accounted for 80% of the increase in the PPI. Even so, the 0.5% gain was the lowest since December. The core index number, which excludes volatile prices for foods, energy and trade services, rose 0.2% from August and was up 5.9% from September 2020. In August, the core PPI rose 6.3% from the year before.

With consumer spending driving about 70% of the U.S. gross domestic product, a 0.7% gain in retail spending in September offered further evidence of continued economic growth. All but two of 13 retail categories increased sales in September, including gasoline stations, where sales rose 1.8% from August, boosted by higher prices. The Commerce Department said overall retail sales rose 13.9% from September 2020, led by a 38.2% increase at gas stations. Since the 2020 recession, sales recovery has been uneven among categories, with sales at online retailers rising at four times the rate of bars and restaurants. 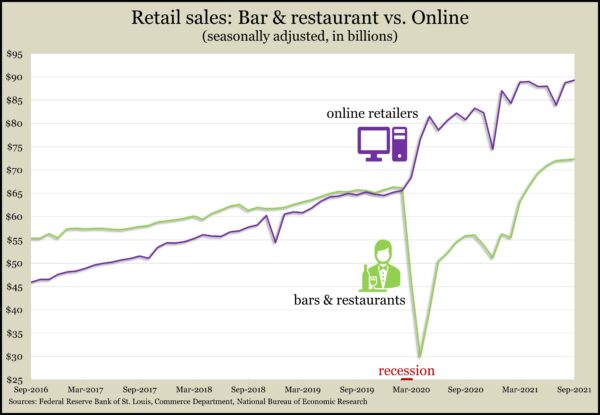 A preliminary October reading of consumer sentiment suggested continued suppressed expectations amid lingering coronavirus concerns and supply-chain disruptions. The survey-based index from the University of Michigan has been near its early-pandemic lows for the last three months, which a Michigan economist said should dampen consumer spending into 2022.