The Commerce Department said orders for durable goods rose 1.8% in August, the 15th increase in 16 months. The indicator for manufacturing demand surpassed the pre-pandemic level for the 10th month in a row. Commercial aircraft led the increase, but even excluding transportation equipment, orders rose 0.5% and were 17.7% above their level in August 2020. Core capital goods orders, a proxy for business investments, rose 0.1% from July and was up 16.4% from the year before.

The annual gain in housing prices hit a fourth consecutive record in July. According to the S&P CoreLogic Case-Shiller home price index, prices rose 19.7% nationwide since July 2020. That was the fastest pace in 33 years of data. Historically low housing inventory and historically low mortgage rates have combined for a strong market for sellers. Also, an S&P economist said the pandemic probably hastened a migration to suburban houses from urban apartments. 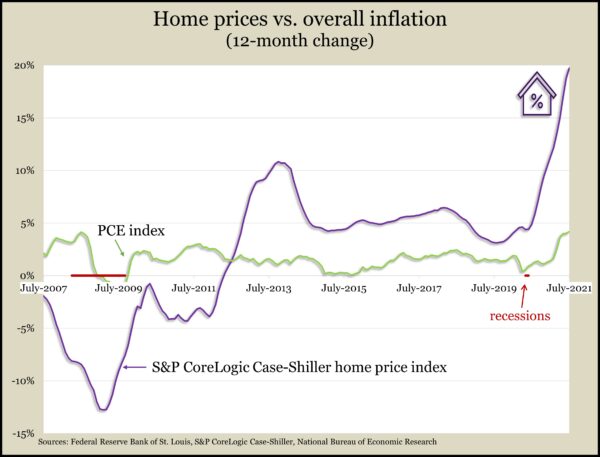 The Conference Board said its consumer confidence index declined again in September, falling to 109.3 after reaching 128.9 in June. The business research group said attitudes toward both current conditions and the near-term outlook slipped because of concerns about the delta variant of COVID-19 and inflation. Index readings remain historically high, the group said, but the downward trend suggests a likely drop-off in consumer spending, which drives about 70% of U.S. economic activity.

The U.S. economy rose at an annual pace of 6.7% in the second quarter of 2021, according to a final estimate of the gross domestic product. The growth rate was up from 6.6% in the previous estimate by the Bureau of Economic Analysis, mostly because the annual rate of consumer spending grew by 12%, instead of the earlier estimate of 11.9%. Measured year to year, the economy rose 12.2% or $2.1 trillion from its slump in mid-2020. The Federal Reserve’s favorite measure of inflation showed a 3.9% increase since the second quarter of 2020, the highest since the third quarter of 2008 and up from 1.8% in the first quarter of 2021.

The four-week moving average for initial unemployment claims rose for the first time in seven weeks but was still 9% below the all-time rolling average for new claims. At 340,000, the average was up 62% from where it was just before the pandemic. The Labor Department said 5 million Americans were claiming unemployment compensation in the latest week, down more than 6 million from the week before as special pandemic relief programs expired.

By far the biggest driver of the U.S. economy, consumer spending, rose 0.8% in August, four times the growth rate in personal income. The Bureau of Economic Analysis reported that personal consumption reached 7.7% above its pre-pandemic peak. The personal saving rate remained historically high, at 9.4% of disposable income, up from 8.3% in February 2020. The Fed’s favorite inflation gauge showed a 4.3% increase from August 2020 – the biggest increase since 1991. Energy prices rose nearly 25% in the last year.

Home improvements kept construction spending at an all-time high in August. The Commerce Department said the pace of construction expenditures overall was unchanged from July at an annual rate of $1.58 trillion. Residential spending rose 0.4% from July, though it declined for new construction. Compared to August 2020, overall housing construction was up 23.9%, led by new single-family houses.

The Institute for Supply Management reported that its manufacturing index signaled expansion in September for the 16th month in a row and at the fastest pace since March. Based on surveys of purchasing managers, the index reflected optimism amid what the trade group called “unprecedented hurdles to meet increasing demand.” Among the challenges cited by respondents: Long lead times, materials shortages, rising commodities prices, transportation difficulties and worker absenteeism.

The University of Michigan’s consumer sentiment index rose in September, surpassing both its August and mid-month marks. The reading of 72.8 was down from as high as 85.5 in June. A university economist referred to a “continuation of depressed optimism” in which consumers are postponing spending temporarily because of the delta variant and inflation concerns. The economist said the temporary hold may not reverse quickly. Real income gains were expected by 18% of households, the lowest since Feb. 2015.