The manufacturing sector expanded in October for the 29th month in a row, though at the slowest rate in that stretch, according to the Institute for Supply Management. The trade group’s index, based on surveys of industry purchase managers, suggested further weakening in the sector with new orders contracting for the second month in a row. Employment grew after shrinking in September, though employers reported being more careful about adding to staff. As demand has receded, the group reported supplier deliveries have been the smoothest since 2009.

Job openings recovered some of their losses in August, suggesting continued strength in the labor market in September. Openings rose 4% to 10.7 million positions, the Bureau of Labor Statistics reported. It was the indicator’s second rise in six months after posting a record 11.9 million openings in March. Demand for workers kept outpacing the number of unemployed jobseekers in September. The number of workers quitting their jobs – a measure of worker confidence – declined slightly for the fifth time in six months but remained historically elevated at 4.1 million. 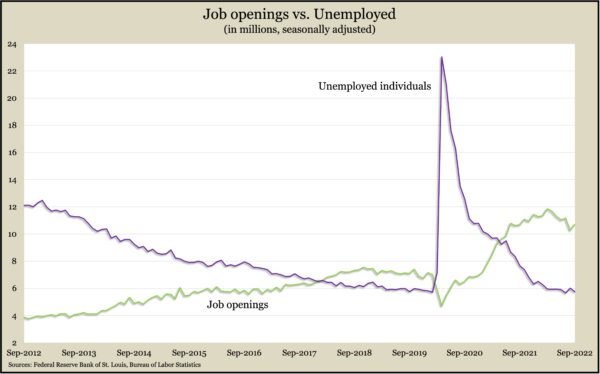 The U.S. trade deficit widened 11.6% in September to $73.3 billion, the Bureau of Economic Analysis reported. Imports rose 1.5%, led by cell phones, semiconductors and pharmaceutical preparations. The value of exports declined 1.1% from August, led by soybeans and crude oil. Through three quarters, the trade gap expanded by 20% from the same time in 2021. Trade deficits detract from the gross domestic product, the chief measure of economic growth.

The four-week moving average for initial unemployment claims declined for the first time in five weeks. Although the level remained 14% above the low point just before the COVID pandemic, it was 41% below the average since 1967. The Labor Department said 1.2 million Americans claimed jobless benefits in the latest week, up 2% from the week before but below the year-before level of 2.7 million claims.

The Bureau of Labor Statistics said the annual rate of worker productivity rose in the third quarter by 0.3%, reversing a decline of 4.1% in the second quarter. Measuring year to year, though, third-quarter productivity sank 1.4% for the third consecutive decline — the first time that happened in data going back to 1982. Over the last four quarters, productivity fell because output, which rose 1.9%, didn’t keep pace with hours worked, which rose 3.4%. Unit labor costs rose 6.1% from the third quarter of 2021, down from a 7.6% increase in the second quarter.

The service sector of the U.S. economy grew in October at the slowest rate in 29 straight months of expansion, according to the Institute for Supply Management. The trade group said its survey of purchasing managers found reports of cooling growth and business activity amid hiring challenges and economic uncertainty. Managers surveyed cited fewer snags from supply chains and logistics compared to earlier in the year.

The Commerce Department said the value of factory orders rose in September for the 18th time in 19 months, led by sales of commercial aircraft. Excluding the volatile transportation category, orders declined slightly from August. Year to year, total orders were 13% higher than they were in September 2021. Excluding transportation, orders were up 12%. Orders for core capital goods, a proxy for business investments, declined 0.4% from August but rose 9.5% from the year before.

U.S. employers added 261,000 jobs in October, the smallest gain in almost two years but still a sign of labor market resilience amid Federal Reserve efforts to slow the economy. The unemployment rate rose to 3.7% from a 53-year low of 3.5% in September, according to jobs data from the Bureau of Labor Statistics. The jobless rate rose as more wannabe workers entered the labor market. As the Fed has been hoisting interest rates to slow inflation, the average wage rose at a faster pace for the second month in a row. Still, the year-to-year increase in wages fell to 4.7%, the lowest since August 2021. 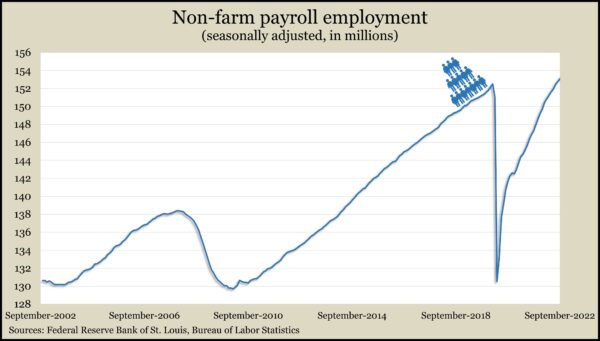