Inflation on the wholesale level continued to moderate in October. The Producer Price Index rose by 0.2% from September and was up 8% from the year before, the Bureau of Labor Statistics reported. The one-year gain was the sixth deceleration in seven months after reaching a high of 11.7% in March. The cost of services overall dropped in October, based on the index. The increase in the cost for goods was fueled by a 5.7% rise in gasoline prices. Excluding volatile costs for food, energy and trade services, the so-called core Producer Price Index rose 5.4% from October 2021, the lowest rate in 17 months.

Retail sales continued growing in October, rising 1.3% from September and up 0.8% when adjusted for inflation. Led by a 4% rise in sales at gas stations, which would include higher prices, 10 of the 13 retail categories registered gains in October. Compared to the year before, every category except electronics and appliance stores increased in sales, an 8.3% gain overall. Data from the Commerce Department indicate consumer spending keeps rising despite higher inflation and interest rates. Retail sales through October were up 32% from the onset of the COVID-19 pandemic and up nearly 15% when adjusted for inflation.

The Federal Reserve reported a slight decline in industrial production in October, the second setback in three months and the fourth in six months. A drop in oil and mining output contributed to the decline. Manufacturing production rose for the fourth month in a row. Total output stayed above its level in February 2020, just before the pandemic, for its 12th consecutive month. Industries’ capacity utilization rate, an early indicator of inflation, edged down from September but remained above the 50-year average for the eighth month in a row.

Housing construction data signaled continued softening in October, as the annual pace of building permits and housing starts receded. A report from the Commerce Department showed new authorizations and new construction for single-family houses at their lowest rates since the pandemic recession. Demand for housing has been slowing as mortgage rates have ratcheted up as a result of Federal Reserve interest rate increases. At the same time, the rate of housing units already under construction hit another record in October, reaching the highest level in data going back to 1970. 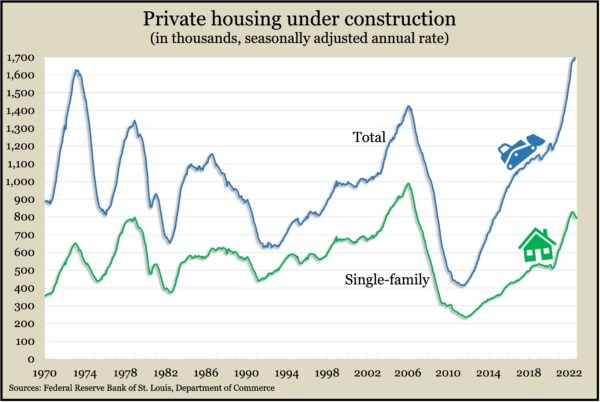 The four-week moving average for initial unemployment claims rose for the fifth time in seven weeks, going 15% above the mark just before the pandemic. Labor Department data showed the four-week average at 221,000 new applications, which was still 40% below the 55-year average, suggesting the relative tightness of the labor market. Total claims rose nearly 2% in the latest week to almost 1.3 million, which was down from 2.6 million the year before.

The Conference Board said its leading economic indicators declined in October for the eighth consecutive month. The business research group said its index fell 0.8% from September and was down 3.2% in the latest six months. That was a reversal from a 0.5% increase in the previous six months. Based on the index, the Conference Board said the U.S. economy may already be in recession. If not, it forecast that a downturn would occur before the end of the year and last until mid-2023. Among the weakening gauges cited by the group were consumer outlook, inflation, interest rates, housing construction and manufacturing.

The National Association of Realtors reported a drop in existing home sales in October, the ninth decline in as many months. The trade group blamed rising mortgage rates for sliding sales, which fell 5.9% in October to an annual rate of 4.4 million single-family houses, town houses, condos and co-ops. That was 28% below the 6.2-million sales rate in October 2021. Even as sales softened, prices continued to climb. The median price of $379,000 in October was 6.6% higher than the year before, marking the 128th consecutive increase.