The manufacturing sector continued expanding in May for the 11th month in a row, though at a slower rate, according to the Institute for Supply Management. The trade group’s index, based on surveys of industry purchase managers, suggested rising demand amid various production constraints. Weak supplies of parts and materials were reported by some survey respondents. Others cited difficulties securing the staffing they needed. Pricing was one of the few components of the index that grew at a faster rate.

The Commerce Department said construction spending continued to grow in March, led by a 23% year-to-year rise in expenditures on housing. At a seasonally adjusted annual rate of $1.5 trillion, construction spending remained above the pre-pandemic high. Although the housing boom has boosted total spending, some sectors remained down, including lodging, amusement and recreation.

The U.S. trade deficit widened 5.6% in March to a record $74.4 billion as the value of exports rose 6.6% while imports rose 6.3%. The Bureau of Economic Analysis said the first-quarter deficit widened 64.2% as exports declined by 3.5% while imports rose 8.5%. The imbalance illustrates how the U.S. economy has been outpacing its trading partners since the pandemic, with U.S. consumers demanding more imported goods such as clothes, furniture, toys and cell phones. 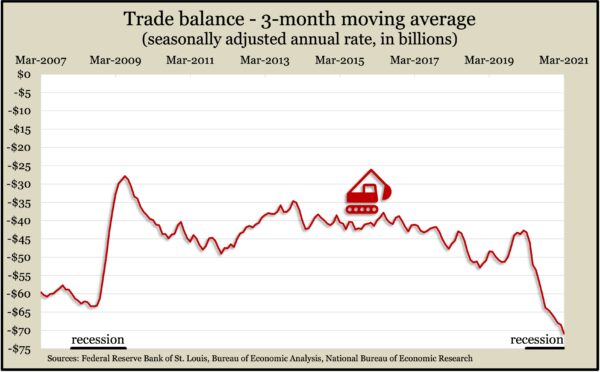 A sign of manufacturing’s comeback was a 1.1% rise in factory orders in March, the 10th gain in 11 months. Orders remained above their pre-pandemic level for the fourth month in a row, up 6.6% from the year before, according to Commerce Department data. Compared to March 2020, factory orders excluding transportation equipment, rose 5.4%. A proxy for business investments rose 10.5% from its year-earlier level.

The service sector of the U.S. economy kept growing in April, although it decelerated from a record pace in March. The Institute for Supply Management said its index for the service sector rose for the 11th month in a row after it contracted last April and May for the first time in 11 years. Purchase managers surveyed for the index reported continued pent-up demand. Some expressed concerns over production capacity constraints as well as insufficient materials and staffing to keep up with orders.

The Bureau of Economic Analysis reported the annual rate of motor vehicle sales rose in April to the highest level since July 2005. Dealers sold at a pace of 18.5 million cars and light trucks in April, up 3.1% from March and more than double the rate of 8.7 million in April 2020, which was the lowest point in 45 years of data. Auto sales are an indicator of consumer spending, which drives about two-thirds of U.S. economic activity. 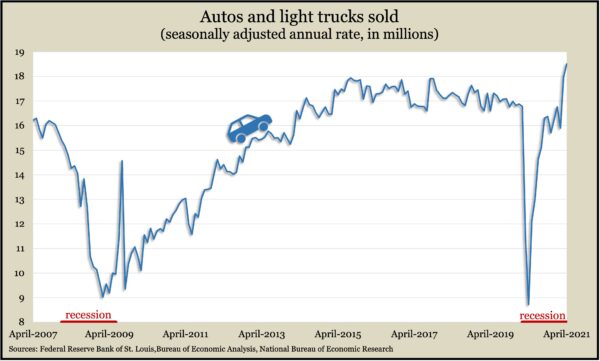 The four-week moving average for initial unemployment claims declined for the 12th time in 13 weeks, dropping nearly 10% from the previous week’s average, the largest fall since August. The moving average was more than seven times higher a year ago, but the latest level is still more than twice where it was in February 2020. The Labor Department said nearly 16.2 million Americans claimed jobless benefits in the latest week, down 2.5% from the week before.

U.S. employers added 266,000 jobs in April, far below analyst expectations and less than a third of the gain in March. According to payroll data from the Bureau of Labor Statistics, the country continued to recover from historical setbacks from the pandemic but remained 8.2 million jobs short of the level in February 2020. Further employment gains in the beleaguered hospitality and leisure industry were offset by monthly declines among temporary workers, couriers and factory workers. The unemployment rate ticked up to 6.1% from 6% in March, the first increase in the rate since it reached a record high of 14.8% a year ago. 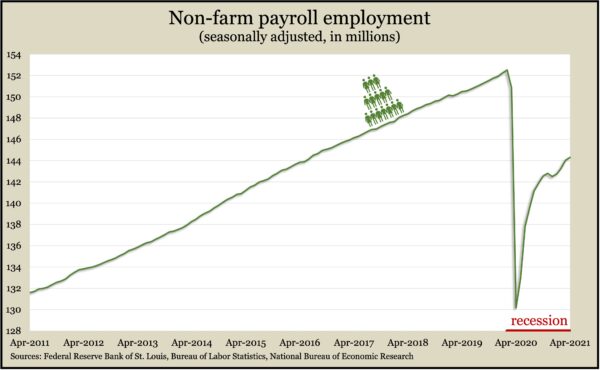