Housing inflation continued to accelerate in March. Home prices increased 13.2% from the year before, according to the 20-city composite S&P CoreLogic Case-Shiller index. It was the fourth month in a row the index posted double-digit increases. Except for last May and June, the growth rate has accelerated every month since July 2019, when the increase was 2.1% from year before. The pace of price growth rose in each of the 20 composite cities in March, led by Phoenix, San Diego and Seattle.

The Conference Board said its consumer confidence index declined slightly in May as some Americans tapered their short-term outlooks based on inflation concerns and fewer federal stimulus payments. The index dipped to 117.2 from 117.5 in March, essentially staying even. Consumers remained upbeat about current economic conditions. The business research group said it expects “robust” growth for the economy in the second quarter.

The annual sales rate for new houses declined 5.9% in April, with inventories remaining near record lows and prices advancing. The Commerce Department said the median price rose 20% from April 2020. Only 4.2 months’ worth of new houses were available for sale, the 12th month in a row below the six-month mark. Houses still waiting for construction to start made up 38% of new-home sales, the highest percentage since 2005. 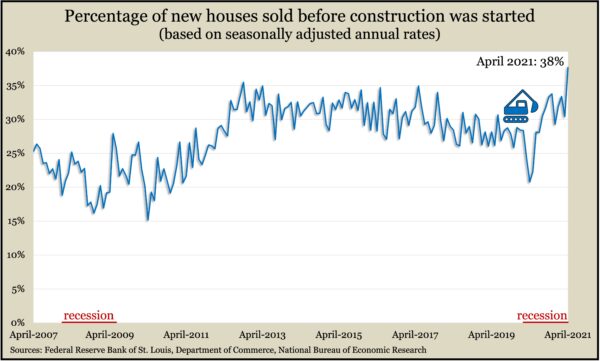 The Commerce Department said durable goods orders fell 1.3% in April, the first decline in 12 months, led by a 6.2% drop in automotive orders. Excluding the volatile transportation sector, orders rose 1% from March. Overall, demand for long-lasting manufactured items remained above the pre-pandemic level for the sixth month in a row. A proxy for business investments rose 2.3% from March and was up 14.7% from April 2020, suggesting commercial adjustments to the setbacks of the pandemic.

The four-week moving average for initial unemployment insurance claims declined for the seventh week in a row and the 15th time in 16 weeks. Labor Department data showed the average dropping below 500,000, down from a record 5.3 million in April 2020 but still above the 52-year low set just before the pandemic. Nearly 16 million Americans received jobless benefits in the latest week.

U.S. consumer spending rose at a faster pace than initially estimated, according to a first revision of first-quarter gross domestic product data. The Bureau of Economic Analysis said consumer spending, which drives about 70% of economic activity, rose at an annual rate of 11.3% from January through March, up from an initial report of 10.7%. The overall pace of GDP remained at 6.4%, as earlier estimated. Compared to the first quarter of 2020 and adjusted for inflation, GDP was down $77 billion or 0.04%. 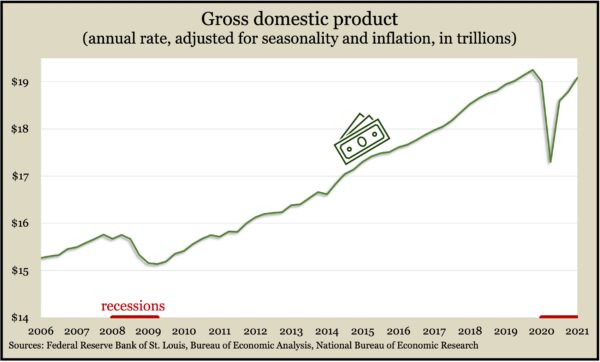 The Bureau of Economic Analysis showed inflation-adjusted consumer spending declining 0.1% in April, after a surge in March fueled by federal stimulus payments. Overall, spending remained above its level just before the pandemic-induced recession. Meantime, personal savings rose to $2.8 trillion, more than double what it was before the recession. The Federal Reserve’s main gauge of inflation jumped to 3.1% from April 2020, the biggest increase since the summer of 1991. The April inflation rate poked above the 2% target the Fed has said it would like to maintain long-term. It was below the average of 3.2%, based on data going back to 1959. 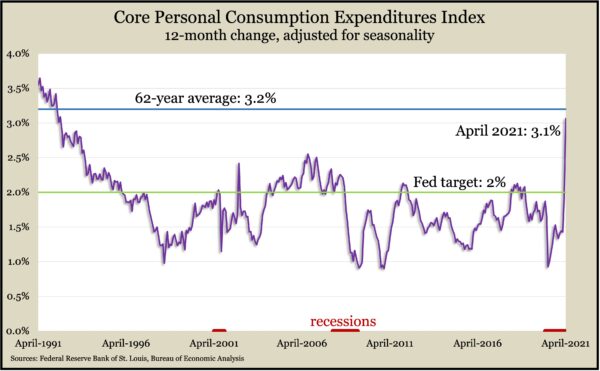 A precursor to spending, consumer sentiment, declined slightly from April, in part because of expectations for higher inflation. The University of Michigan said a record number of consumers reported rising prices in the May survey. But a record number also forecast falling unemployment, which along with heaps of personal savings should provide further momentum for spending, an economist from the university said.