The housing industry continued to be a bright spot in the economic recovery with building permits and housing starts in April near their highest levels in 14 years. The pace for starts slowed 9.5% from March to nearly 1.6 million houses but was up 67.3% from the year before. Notably, completions of single-family houses rose for the 10th time in 11 months to the highest level since 2007, according to data from the Commerce Department. The annual rate of building permits rose for the second month in a row after hitting a 14-year high in January. 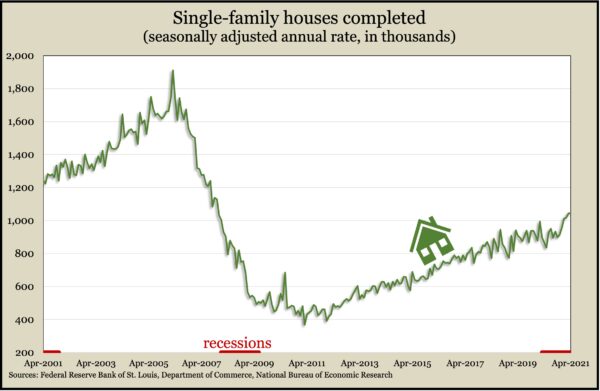 The four-week moving average for initial unemployment claims declined to 504,750, down for the sixth week in a row and the 14th time in 15 weeks. While the rolling average of new jobless applications continued dropping below the record 5.3 million claims in April 2020, it remained more than double the rate of 208,000 just before the pandemic. Nearly 16 million Americans claimed unemployment benefits in the latest week, about three-quarters of them tied to special pandemic relief.

The Conference Board said its index of leading economic indicators rose 1.8% in April to recover from the recession and surpass its January 2020 peak. The business research group said despite measures of employment and production still lagging pre-pandemic levels, U.S. economic growth should continue and perhaps accelerate. It forecast an annual GDP growth rate of 8%-9% for the second quarter and full 2021 growth of 6.4%.

Lack of inventory held back existing home sales in April for the third month in a row, according to the National Association of Realtors. The annual rate of sales fell 2.7% to 5.85 million houses, which was still up 33.9% from its pace in April 2020. The trade group said 2.4 months’ worth of houses were available at the current rate of demand, up from 2.1 months in March, still near a record low. As a result, the median price rose 19.1% from April 2020, the 110th consecutive year-to-year price gain.