Recovery in the labor market roared back to a record level of demand in March. The number of job openings rose 7.9% from February to 8.1 million postings, the most in more than 20 years of data. Hotels and restaurants led the surge in openings, but they also led the workplaces experiencing the highest numbers of employees quitting their positions. Nationwide, some employers have complained about staffing shortages despite other reports from the Bureau of Labor Statistics showing more than 9 million Americans out of work and actively seeking employment. 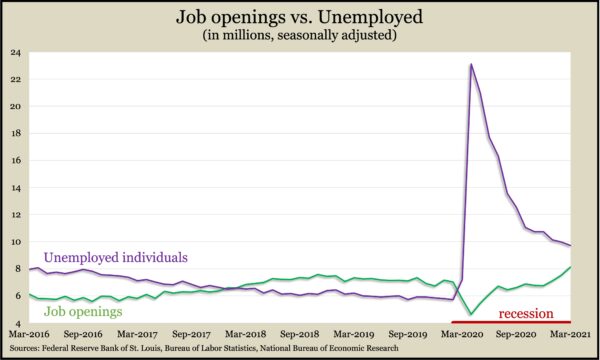 By one measure, inflation hit its highest mark in more than 25 years in April. The Bureau of Labor Statistics reported that its core Consumer Price Index rose 3% from April 2020. That’s up from a 2.6% reading in March and is the biggest increase since January 1996. The core CPI excludes volatile prices for food and energy items. Year-to-year, the total CPI rose 4.2%, the most since 2008. Gasoline prices rose 49.6% in the last year, while the cost for used vehicles increased 21%. Demand for used cars has risen as more consumers have shifted from public transportation since the pandemic. 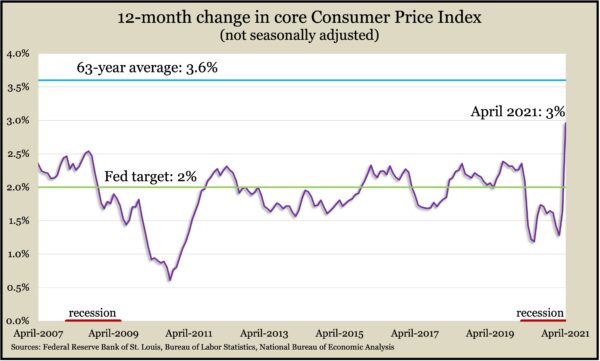 The four-week moving average for initial unemployment claims declined for the 13th time in 14 weeks and fell 89% below historic levels the year before. Though the trend remained downward, data from the Labor Department showed new jobless applications were still 44% above their 54-year average. Nearly 17 million Americans were claiming jobless benefits in the latest week, up 4.3% from the week before. More people received payments from pandemic-related relief programs.

Inflation on the wholesale level rose 0.6% in April, led by increases in service prices, according to the Bureau of Labor Statistics. Since pandemic-plunged prices a year before, the Producer Price Index rose 6.2%, the highest in comparable measures dating back to 2010. A core rate of wholesale inflation, stripping out volatile prices for the categories of food, energy and trade services, rose 4.6%, also a high in data going back to 2014.

Retail sales stayed steady in April after rising 10.7% in March fueled by federal stimulus checks. Only five of the 13 retail categories gained in April, led by bars and restaurants and car dealers, which benefited from rising vehicle prices. Overall retail sales remained above their pre-pandemic level for the 10th month in a row, though some categories have done better than others. According to Commerce Department figures, sales for bars and restaurants remained 2% behind where they were in February 2020, while online sales grew 34%. 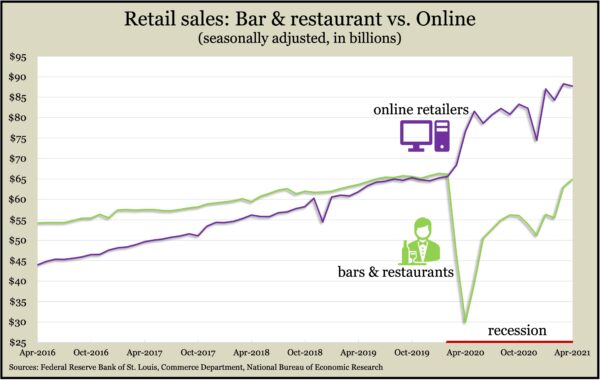 The Federal Reserve reported slighter gains in industrial production in April, although output remained 2.7% below levels before the pandemic. Production continued to recover from setbacks in parts of the South, which was hit by extraordinary storms in February. Supply bottlenecks also hampered output, with the auto industry contracting 4.3% in April as a result of a worldwide shortage of semiconductor chips. Industries’ capacity utilization rate, an early indicator of inflation, rose marginally to 74.9%, up from an all-time low of 64.2% last April. The long-term average rate of 79.6% hasn’t been met since April 2008.

The University of Michigan said consumer sentiment slipped from the end of April as both expectations and current assessments fell because of fears of inflation. Personal forecasts for incomes keeping pace with inflation were at their weakest point in five years. An economist with the survey-based index said despite concerns of rising prices, consumer spending should keep rising because of pent-up demand and record levels of personal savings.