The manufacturing sector expanded in February at its fastest pace in three years, according to the Institute for Supply Management. The trade group’s index showed accelerating growth in new orders, production, hiring and back logs. The index has indicated expansion for nine months in a row following a three-month contraction last spring with the outbreak of the COVID-19 pandemic. Purchasing managers surveyed for the index expressed increasing optimism but identified constraints from labor supply and inputs such as supplier deliveries.

Housing led a 1.7% increase in the pace of construction spending in January, which reached a record annual rate of nearly $1.5 trillion. The Commerce Department reported residential spending rose 2.5% from the December pace and was up 21.1% from January 2020. Low interest rates and heightened interest in home space, prompted by pandemic quarantines, have fueled a rise in homebuilding and remodeling projects.

The service sector of the U.S. economy expanded in February for the ninth month in a row but at the slowest pace since it contracted in May. The Institute for Supply Management said its non-manufacturing index showed continued growth for the biggest portion of the economy. Purchasing managers expressed optimism, especially with the prospect of more vaccinations. The trade group blamed the expansion’s slowdown on supply-chain challenges including production capacity constraints, material shortages and issues over logistics and employment.

Another sign of manufacturing’s comeback was a 2.6% increase in factory orders in January. Orders were 1.3% ahead of the year-ago level after rising nine months in a row, including an acceleration in the last two months. Commerce Department data showed a proxy for business investments rising 8.3% from January 2020, suggesting companies have been plowing money into upgrades that could pay off as the pandemic recedes.

The four-week moving average for initial unemployment claims declined for the fourth week in a row, reaching its lowest level since early December. A Labor Department report showed first-time applications still more than three times where they were a year ago. More than 18 million Americans claimed unemployment compensation in the latest week, down from 19 million the week before, but that compares to 2.1 million at the same time last year.

The Bureau of Labor Statistics said worker productivity declined at an annual rate of 4.2% in the fourth quarter, the worst showing since the 1982 recession. That was down from an earlier estimate of a 4.8% decline and resulted from the number of hours worked rising at about twice the rate as the gain in output. Since the fourth quarter of 2019, productivity rose 2.4% as output declined 2.6% while hours worked fell 4.9%. Labor costs rose 4.2% from the end of 2019, the result of a 6.7% growth in wages coupled with the 2.4% gain in productivity.

The U.S. trade deficit widened by 1.9% in January to $68.2 billion, the Bureau of Economic Analysis reported. During the month, exports grew by 1%, led by industrial supplies and materials. Imports rose 1.2%, driven by consumer goods, probably boosted by recent economic stimulus payments to U.S. households. Compared to the first month of 2020, the trade gap expanded by 53.7% as exports declined 7.6% and imports grew 3.2%.

U.S. employers added 379,000 jobs in February, recovering nearly 13 million jobs from record declines last spring. They remained 9.5 million jobs shy of the pre-pandemic peak last February. According to payroll data from the Bureau of Labor Statistics, the leisure and hospitality field accounted for most of the employment gains in February. Temporary employment services, some retailers and manufacturing also added jobs. The bureau’s household survey showed the unemployment rate declining to 6.2% from 6.3% in January, but that was down from a record 14.8% in April. Last February, the rate was 3.5%, the lowest in more than 50 years. 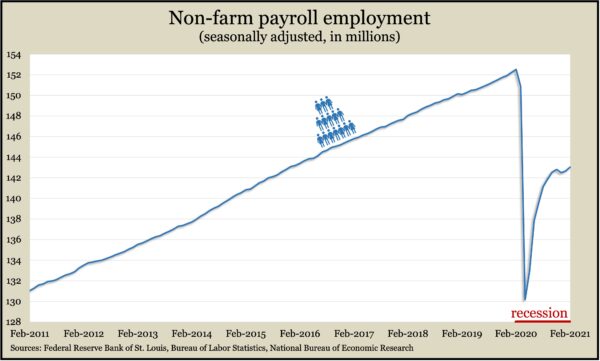