Signs of moderation appeared in wholesale inflation numbers for February. The Bureau of Labor Statistics said its Producer Price Index rose 0.8% from January, but that was down from 1.2% the month before. Goods prices accounted for all of the February increase fueled by a 15% spurt in gasoline prices. Excluding food, energy and trade services, the core PPI rose just 0.2% from January, the smallest gain since Feb. 2020. Year to year, the headline PPI rose 10% in February, unchanged from January; the core index was up 6.6% following a 6.8% gain in January and 7% in December and November.

U.S. consumer spending slowed in February, as retail sales rose 0.3%, according to the Commerce Department. That was down from a 4.9% burst in January. Sales rose in seven of 13 retail categories, led by gains of 5% at gas stations and 2.5% at bars and restaurants. Excluding gas station sales, which include rising prices, retail sales declined 0.2% from January. Total sales were up nearly 18% from the year before, including gains of 36% for gas stations, 33% for bars and restaurants and 31% for clothing stores. Retail spending accounts for about two-thirds of consumer spending which drives about two-thirds of the gross domestic product. 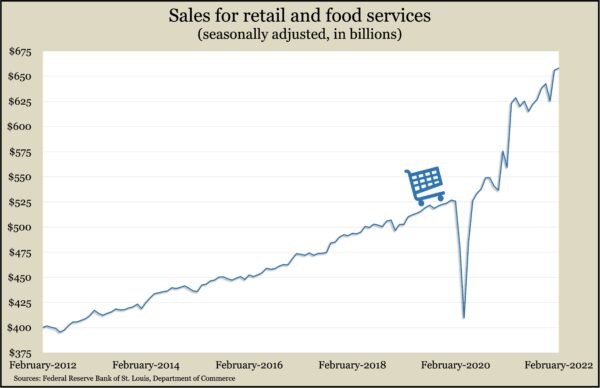 The pace of housing starts rose 6.8% in February, reaching its fastest growth rate since June 2006, the Commerce Department reported. At the same time, building permits declined 1.9% from a 16-year high in January. The annual rate of houses under construction rose to the highest level since 1973. Outside of the housing bubble in 2005-2006, single-family housing construction also was at elevations last seen nearly 50 years ago. 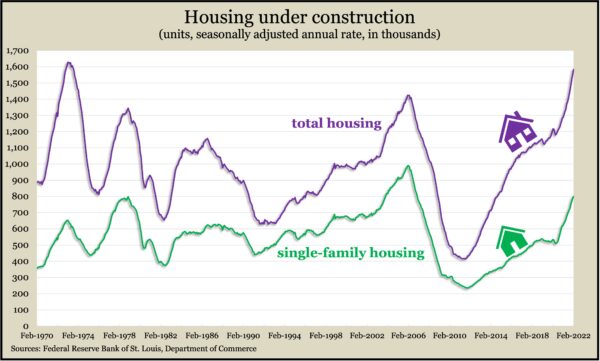 The four-week moving average for initial unemployment claims fell for the fifth time in six weeks, reaching 40% below the 55-year average. Data from the Labor Department continued to show a tight job market in which employers are reluctant to let workers go. Some 1.4 million unemployed individuals were receiving jobless benefits in the latest week, the lowest level since 1970, compared to a record 23 million in May 2020.

U.S. industrial output expanded in February, rising 0.5% from January to reach its highest level since the end of 2018. The gain was powered by a 1.2% increase in manufacturing production, which was broadly distributed except in the automotive sector, still besieged by a shortage of computer chips, according to the Federal Reserve. Capacity utilization—considered a leading indicator of inflation—rose to its highest level since April 2019 but remained well below its 50-year average.

The Conference Board’s index of leading economic indicators rose 0.3% in February, following a decline of 0.5% in January and a gain of 0.8% in December. The business research group noted that indicators did not yet reflect the Russian invasion of Ukraine, which could add supply-chain costs and higher prices for energy, food and metals to a U.S. economy already facing high inflation, rising interest rates and tight labor markets. The group lowered its forecast for GDP growth in 2022 to 3%, down from 3.5% a month ago, still ahead of pre-pandemic rates of 2%.

Existing home sales slowed in February, down 7.2% from January and 2.4% behind their year-ago pace, the National Association of Realtors reported. As sales eased, the supply of houses on the market grew slightly to 1.7 months’ worth, which was still historically low. The median sales price rose 15% from the year before to $357,300, the 120th consecutive year-t0-year gain. The Realtors said high prices and rising mortgage rates were making home-buying less affordable for more Americans.