The broadest measure of inflation rose 0.4% in February, more than half of it accounted for by a 6.4% increase in gasoline prices. The Bureau of Labor Statistics said its Consumer Price Index grew at a 12-month rate of 1.7%, the highest year-to-year increase since 2.3% inflation in February 2020. In the last year, gas prices rose 1.5% or less than inflation overall. Excluding volatile prices for food and energy, the core CPI rose 1.3%, slowing for the second month in a row and down from a 2.4% rate in February 2020.

The gradual recovery of the labor market continued as the four-week moving average for initial unemployment claims fell for the fifth week in a row, reaching its lowest point since Thanksgiving. The 759,000-claim average compares to nearly 5.8 million in April but was still more than three times its level a year ago and more than double its average in Labor Department data going back to 1967. Weekly first-time applications fell to their lowest level in 17 weeks.

U.S. employers posted 6.9 million job openings in January, the first increase in three months, as hiring rose and separations declined slightly. Overall, data from the Bureau of Labor Statistics suggests growing demand for workers as consumers received federal relief payments and COVID-19 vaccinations increased. Earlier government reports showed more than 10 million Americans unemployed and looking for work in January while an estimated 4 million at least temporarily have dropped out of the labor force. 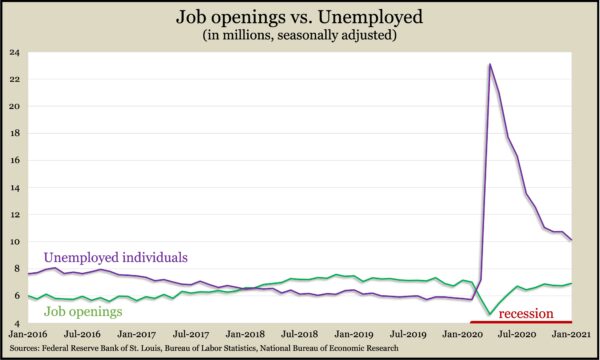 Inflation on the wholesale level moderated in February, rising 0.5% following a record 1.3% gain in January. The Producer Price Index rose again mostly because of energy costs, including a 13.1% increase in gasoline prices, which accounted for 40% of the monthly gain. Excluding volatile prices for energy, food and trade services, the core PPI rose 0.2%, the 10th consecutive monthly increase. The 12-month gain in the index overall was 2.8%, the most in more than two years. The core PPI rose 2.2% from February 2020, the biggest one-year increase since May 2019.

A preliminary look at consumer sentiment in March found greater optimism than any time since March 2020, attributed to prospects for COVID-19 vaccines and plans for more federal relief to households. University of Michigan researchers said gains in confidence were widespread but largest among consumers in the bottom third of incomes and those 55 and older. An economist with the survey said feedback suggests stronger consumer spending in the next year. Although expectations for inflation remain elevated for the next year, consumers anticipate prices moderating again over the long term.