The Federal Reserve reported a 1.9% annual rate of rising consumer debt outstanding in January, including a 0.3% drop in credit card debt. That marked the first decrease in so-called revolving credit since April 2021, as consumer confidence in using credit cards has been recovering from a collapse at the onset of the COVID pandemic. Since February 2020, credit card debt was down $55 billion through January, about 5% below where it started the pandemic. It took credit card levels nearly a decade to recover from the Great Recession.

The U.S. trade deficit widened by 9.4% to a record $89.7 billion in January, the Bureau of Economic Analysis reported. During the month, exports declined by 1.7%, led by pharmaceutical preparations and travel services. Meanwhile, imports rose 1.2% to a record $314 billion, driven by automotive goods and oil. Compared to the first month of 2021, the trade gap expanded by 37.7% as exports rose 15.4% and imports grew 21%.

U.S. employers posted 11.3 million job openings in January, down slightly from a record 11.4 million in December. Demand for workers continued to outstrip supply as the number of unemployed workers seeking jobs in January reached only 6.5 million, according to earlier reports from the Bureau of Labor Statistics. The biggest decline in job postings in January was in hotels and restaurants. The government report showed 4.3 million jobs were vacated by workers who quit, down from a record 4.5 million in December. 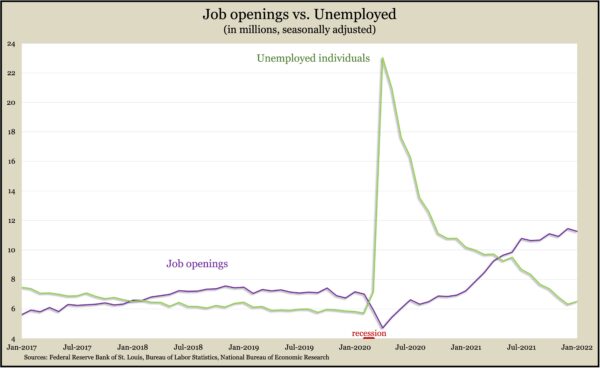 The broadest measure of inflation rose 0.8% in February, about a third of it fueled by a 6.6% increase in gasoline prices. The Bureau of Labor Statistics said its Consumer Price Index grew at a 12-month rate of 7.9%, the highest year-to-year increase since 8.4% inflation in January 1982. In the previous year, gas prices rose 38%; prices for used vehicles accelerated 41%. Excluding volatile prices for food and energy, the core CPI rose 0.5% in February, down from 0.6% in December and January. Compared to the year before, core inflation rose 6.4%, the highest since August 1982. 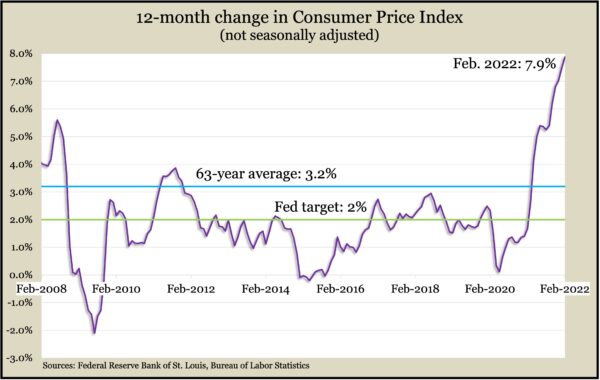 The Labor Department reported the four-week moving average for initial unemployment claims rose for the first time in five weeks, though it still remained 38% below its average since 1967. Total claims for the latest week declined 3% from the week before to 1.9 million. The year before, claims totaled 20.8 million.

A preliminary look at consumer sentiment in March found the lowest expectations for personal finance in nearly 70 years of surveys and the highest forecasts for inflation since 1981. The longstanding University of Michigan index dipped to a reading of 59.7, down from 62.8 in February and the year before. According to the preliminary survey, consumers were less optimistic about prospects for the economy – except for the labor market.