The annual rate of existing home sales sank 0.9% to 5.8 million in May, the fourth setback in a row. The sales pace was 44.6% higher than the year before, as the National Association of Realtors said overall activity was leveling off to about where it was before the COVID-19 pandemic. Lack of inventory continued to challenge the market, raising prices for the 111th month in a row, compared to the year before. The median price was $350,300, up 23.6% from May 2020. The trade association said prices are pushing more first-time home buyers out of the market.

The Commerce Department and Department of Housing and Urban Development said the annual rate of new home sales slowed 5.9% in May, driven by a 14.5% decline in the South. The sales pace of 769,000 new houses was up 9.2% from May 2020, although it was the third time in four months the volatile indicator fell. It reached a 15-year high in January. The supply of houses for sale rose slightly from April but remained low historically. The median sales price rose to $374,400, up 18.1% from May 2020. A greater proportion of houses sold were in the higher price ranges and at earlier stages of completion. 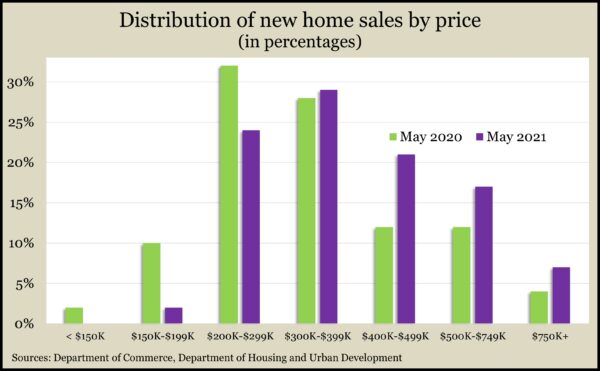 Durable goods orders rose 2.3% in May after a 0.8% setback in April, advancing for the 12th time in 13 months. Orders were up 25.7% from May 2020. The Commerce Department said demand for commercial aircraft and parts led the latest increase. Excluding transportation equipment, orders rose 0.3% in May and were up 17.7% from the year before. A proxy measure for business investment declined 0.1% in May but was up 16.3% from May 2020.

The U.S. economy rose at an annual pace of 6.4% to begin 2021, according to the final first-quarter estimate of the gross domestic product. The growth rate was unchanged from the previous estimate by the Bureau of Economic Analysis. The economy edged up 0.4% from the year before, when the COVID-19 pandemic shut down much of the economy. GDP was still 0.9% shy of its previous peak, at the end of 2019. The Federal Reserve’s favorite measure of inflation showed a 1.6% increase since the first quarter of 2020, remaining below the Fed’s 2% target. 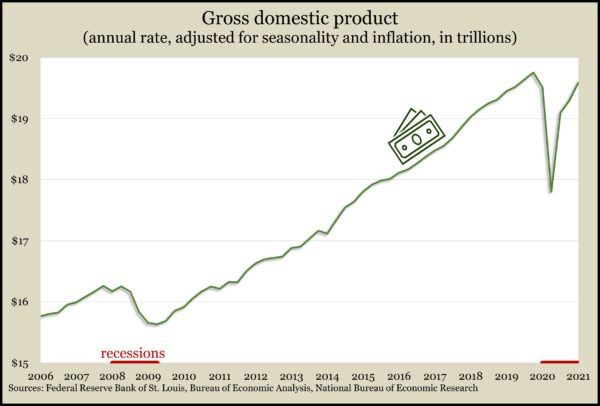 The four-week moving average for initial unemployment claims rose for the first time in 11 weeks as the labor market generally continued to improve from early pandemic levels. The average of 397,750 new claims was down from a record 5.3 million in April 2020. Just before the pandemic, initial applications averaged just below 210,000, the lowest since 1969, according to Labor Department data. More than 18 million Americans were receiving unemployment benefits in the latest week, unchanged from the week before.

By far the biggest driver of the U.S. economy, consumer spending rose less than a tenth of a percent in May while personal income fell 2% because of a decline in government assistance tied to the pandemic. The Bureau of Economic Analysis reported that personal consumption remained above its pre-pandemic level and shifted more toward bars and restaurants, recreational services and hotels. The personal saving rate remained historically high, at 12.4% of disposable income. The Fed’s favorite inflation gauge showed a 3.4% increase in prices since May 2020 – the highest rate in more than 29 years. 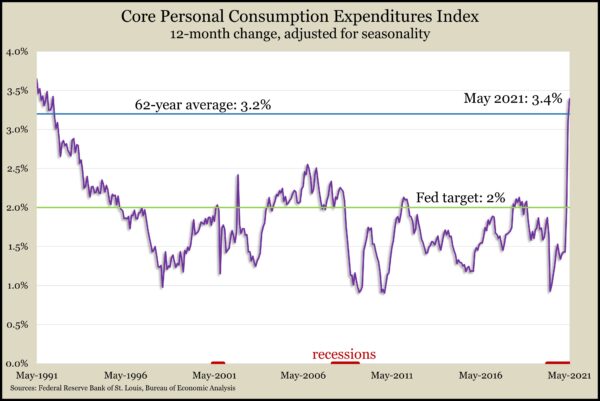 The University of Michigan’s consumer sentiment index rose in June, although not as much as indicated in a mid-month estimate. The reading of 85.5 was the second-highest since the pandemic started and up from 82.9 in May. Consumers lowered expectations for inflation from a decade-high forecast in May. They also said they consider current price surges to be temporary. An economist with the survey said consumers will be hanging on to their savings and wealth more than before the pandemic, in part because of concerns about COVID-19 variants.