The U.S. services sector continued expanding in June, although at a slightly slower pace, according to the Institute for Supply Management. The trade group’s services index showed the 13th consecutive month of growth, expanding all but two of the latest 137 months. The index reading of 60.1 fell from the record pace of 64 in May. Purchase managers surveyed for the index said their businesses continued to grow despite ongoing challenges related to materials shortages, inflation, logistics and employment.

U.S. employers posted a record 9.2 million job openings in May, while the rates of layoffs and firings reached record lows. The Bureau of Labor Statistics showed the gap between help wanted and the number of unemployed jobseekers narrowing further, nearly returning to pre-pandemic scenarios in which openings exceeded available applicants. As workers have gained leverage in the supply-and-demand equation, more have been electing to quit their jobs with hopes of improving their situation. In April, a record 4 million workers voluntarily left their jobs, although the number declined in May. 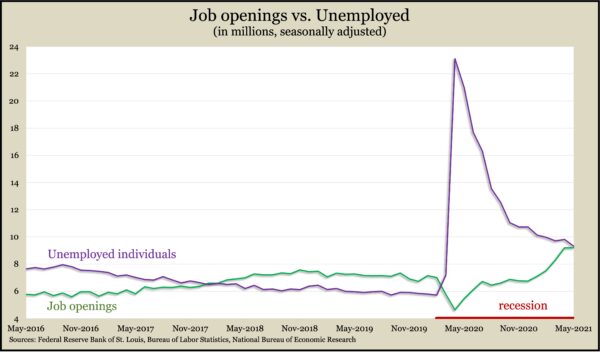 The four-week moving average for initial unemployment claims sank for the second week in a row and the 12th time in 13 weeks as the labor market continues to recover from the pandemic-induced recession. Average claims were at about 395,000, less than a third of what they were the year before and within 6% of the 54-year average. The Labor Department said 14.2 million Americans were receiving unemployment benefits in the latest week, down from 33.2 million the year before. More than 11 million of the current claims were tied to temporary pandemic relief benefits.

The Federal Reserve reported that consumer credit card debt rose in May, although it remained down near 2017 levels. With consumer spending driving about 70% of U.S. economic activity, credit card debt can signal consumers’ ability and willingness to spend. Since peaking just before the pandemic, such debt is still down $123 billion or 11.2%. In The Great Recession, it took almost 10 years for credit card debt to recover. 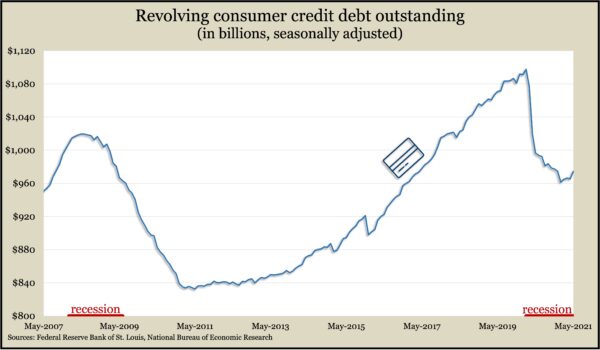