Demand for manufactured goods stayed steady in May as factory orders rose 1.6% from April, the eighth consecutive increase and the 12th in the last 13 months. The Commerce Department reported a 2.9% monthly gain in consumer goods orders. Demand for transportation equipment rose for the seventh time in eight months, led by military aircraft. Core capital goods orders, a proxy for business investments, was up 0.6% from April and more than 10% from the year before.

The U.S. services sector continued expanding in June, although at the slowest pace since May 2020, according to the Institute for Supply Management. The trade group’s services index showed the 25th consecutive month of growth. Index components suggested employment was contracting, new orders were weakening and supplier deliveries were slowing further. The group cited “logistical challenges, a restricted labor pool, material shortages, inflation, the coronavirus pandemic and the war in Ukraine.”

U.S. employers posted 11.3 million job openings in May, down the second month in a row after a record 11.9 million in March. The Bureau of Labor Statistics reported slight declines in hiring for the third month in a row. The number of layoffs and firings rose minimally but was up for the fourth time in five months. The number of workers voluntarily quitting their jobs fell below 4.3 million for the first time since January after reaching a record 4.5 million in November. 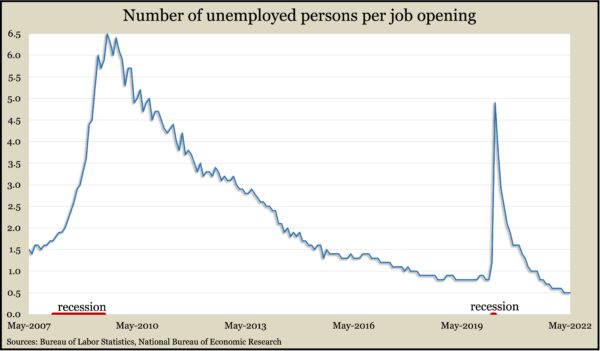 The four-week moving average for initial unemployment claims rose to its highest level since December, increasing for the 12th time in 13 weeks after hitting a record low in early April. Even so, average claims were 37% below the 55-year average, suggesting continued reluctance among employers to let workers go. The Labor Department said 1.3 million Americans were receiving unemployment benefits in the latest week, up 0.1% from the week before but down from 14.2 million the year before.

A decline in consumer goods imports helped narrow the U.S. trade deficit in May. The negative gap between goods and services sold from the country vs. what’s purchased from abroad narrowed for the second month in a row, falling to $85.5 billion, down 1.3% from April. Through the first five months of 2022, the deficit was 38% wider than the year before. In May, the value of exports rose 1.2%, led by energy products. Imports grew by 0.6%, with purchases of energy products and travel-related services offsetting a $1.5 billion decrease in imported consumer goods. Trade deficits count against the gross domestic product.

U.S. employers added 372,000 jobs in June, and the unemployment rate stayed at 3.6% for the fourth month in a row. The Bureau of Labor Statistics showed the overall employment picture continuing to brighten, with the number of jobs just 524,000 (0.3%) shy of the pre-pandemic level after losing about 22 million. The unemployment rate neared the 3.5% mark in February 2020, which was a 50-year low. While leisure and hospitality accounted for about a sixth of the jobs added in June, the industry remained 1.3 million (7.8%) below the February 2020 level. Private-sector employment exceeded the pre-pandemic number, but government jobs were down by 664,000 (2.9%). 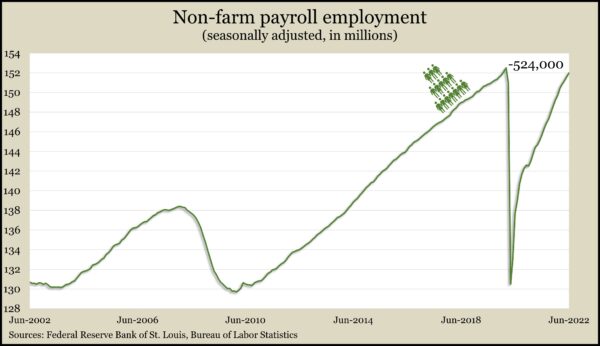