The year-to-year increase in residential prices slowed in May for the second month in a row. The S&P CoreLogic Case-Shiller national home price index rose 19.7% from the year before, down from 20.6% in April. Of 20 cities tracked in a composite index, 16 had lower increases in May, but all 20 saw double-digit gains. A spokesman for the index projected that further price gains will narrow as rising financing costs for houses take a toll on demand.

The Conference Board said its consumer confidence index declined in July for the third month in a row, suggesting slower economic growth entering the third quarter and raising the risk of recession. July’s drop-off in optimism occurred mostly in consumer expectations. The business research group said ongoing concerns about inflation were holding back more consumers’ plans to buy big-ticket items. About 70% of the U.S. economy is driven by consumer spending.

Manufacturing demand remained high in June, with durable goods orders rising for the eighth time in nine months. Orders rose 1.9% from May, with broad gains led by an 80% jump in contracts for military aircraft. Excluding the volatile transportation category, the value of orders rose 0.4% from May, according to figures from the Commerce Department. Core capital goods orders, a proxy for business investment, rose 0.5% from May and 10% from June 2021.

The National Association of Realtors blamed rising mortgage rates and high prices for dampening demand for real estate in June. The trade association said its pending home sales index dropped 8.6% from May and 20% from the year before. The Realtors said home buying is 80% more expensive than it was three years ago and that nearly a quarter of those who bought a house in 2019 wouldn’t qualify to buy now. The association projected a 13% decline in sales in 2022.

The U.S. economy sank at an annual pace of 0.9% in the second quarter, the second consecutive decline, following a 1.6% setback in the first three months of the year. Adjusted for inflation, gross domestic product rose 1.6% from the same time in 2021 and was up 2.5% from the peak before the pandemic, according to new data from the Bureau of Economic Analysis. Although two consecutive quarters of declining GDP is a common shorthand for economic recession, the actual definition is more complicated. Some officials say the latest data fall short of showing a recession yet. 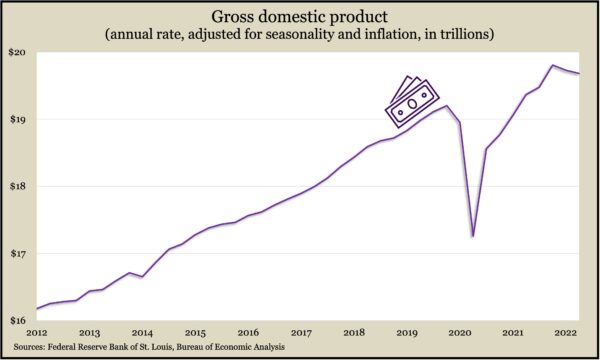 The four-week moving average for initial unemployment claims continued rising since hitting an all-time low in early April. The Labor Department reported the moving average at nearly 250,000 claims, the highest since November and up from about 170,000 in April. The level was 30% above the low point just before the pandemic yet 33% lower than the 55-year average. In the latest week, nearly 1.5 million Americans claimed jobless benefits, up 9% from the week before but down from 13.1 million the year before.

The Bureau of Economic Analysis said consumer spending rose 1.1% in June, although it was just 0.1% after adjusting for inflation. Personal income gained 0.6% in June, the same as in May. As a result of increased spending on steady income, the personal saving rate fell to 5.1%, the lowest since August 2009. The personal consumption expenditures index, which the Fed follows for inflation, rose 6.8% from June 2021, the highest since January 1982. 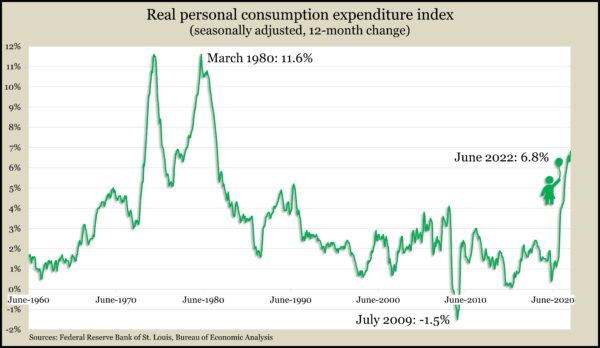 Often a pre-cursor to spending, consumer sentiment, was little changed in July after hitting an all-time low in June, according to a longstanding survey from the University of Michigan. Consumers’ assessment of current economic conditions improved slightly, but inflation continued to weigh heavily on sentiments. Even so, expectations for long-term inflation stayed steady with outlooks expressed in recent months.