The U.S. housing market slowed amid rising mortgage rates in June. The annual rates for both housing starts and building permits declined from May, although they both remained above levels just before the pandemic, which were the highest since the Great Recession. A Commerce Department report showed housing under construction reaching an all-time peak for the fourth month in a row after surpassing the record set in 1973. The pace of construction for single-family houses slowed for the second consecutive month. 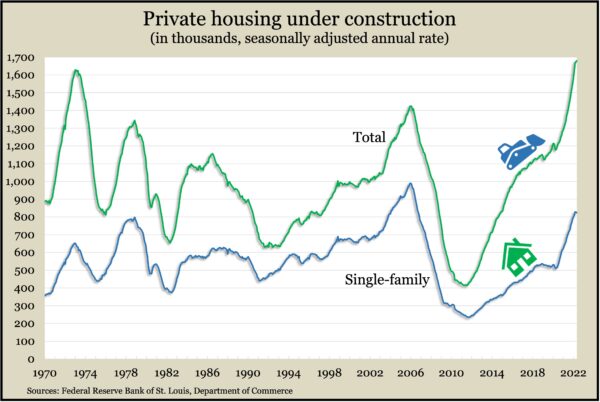 The pace of existing home sales slowed for the fifth month in a row in June, though time on the market hit a record low and the median price reached a record high. The National Association of Realtors said the annual sales rate dipped to 5.12 million existing houses, down 5.4% from May and down 14% from June 2021. The trade group blamed the rise in mortgage rates and high prices for discouraging more wannabe home buyers. The median sales price in June hit $416,000, up 13% from the year before and the 124th consecutive year-to-year increase. Meanwhile, houses that sold tended to go fast. The typical house sold in 14 days in June, the quickest in 11 years of data.

Except for one week of no change, the four-week moving average for initial unemployment claims rose for the 15 weeks since hitting an all-time low in early April. The 240,500 average claims were the highest since the beginning of December and 25% above the low just before the pandemic. At the same time, the measure of employers’ reluctance to let workers go was 35% below the 55-year average, according to Labor Department data. In the latest week, total claims dropped 3% to 1.3 million, down from 12.6 million the year before.

The Conference Board said its index of leading economic indicators “points to a US economic downturn ahead.” The index from the business research group fell 0.8% in June, its fourth consecutive deceleration in growth. The group said consumer pessimism, weaker labor conditions, lower stock prices and softer factory orders sank the June index. Considering high inflation and Fed moves to raise interest rates, the Conference Board downgraded its forecast for real gross domestic product to a 1.7% increase from 2021 (from an earlier projection of 2.3% growth) with a 0.5% rise in 2023 (down from 1.8%).