The Commerce Department said orders for durable goods rose 0.7% in May, the seventh increase in eight months. The indicator for manufacturing demand reached an all-time high, unadjusted for inflation. It was nearly 11% above its level in May 2021. Orders for transportation equipment led all categories as contracts for cars and military aircraft more than offset a decline in commercial aircraft. Even excluding volatile transportation equipment, orders rose 0.7% and were about 9% above their level in May 2021. Core capital goods orders, a proxy for business investments, rose 0.5% from April and were up 10.2% from the year before.

Pending home sales rose in May for the first time in seven months. The National Association of Realtors said its index for contract signings advanced 0.7% from April, though it was down nearly 14% from May 2021. The trade group said higher mortgage rates are pulling sales lower even while demand continued to outpace supply. Based on the median sales price and a 10% down payment, the group said monthly mortgage costs were up $800 from the beginning of the year.

The annual gain in housing prices decelerated in April for the first time in five months but continued to far outmatch overall inflation. According to the S&P CoreLogic Case-Shiller home price index, prices rose 20.4% nationwide since April 2021. The growth rate accelerated in nine of the 20 cities in the Case-Shiller composite index. All continued to have double-digit increases. An analyst for the index said more expensive mortgage financing should slow price increases: “A more challenging macroeconomic environment may not support extraordinary home price growth for much longer.” 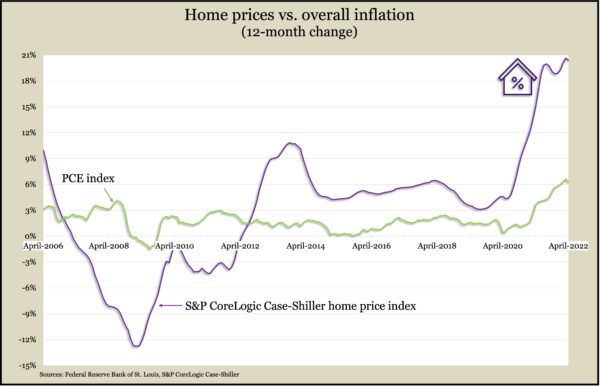 The Conference Board said its consumer confidence index declined in June for the second month in a row, suggesting weaker economic growth for the rest of the year and an increased chance of recession before 2023. The business research group said attitudes toward current conditions were little changed from May, but expectations fell to their lowest point in nearly a decade. At the heart of the gloom: Inflation concerns, particularly rising prices for food and gasoline.

The U.S. economy sank at an annual pace of 1.6% in the second quarter of 2022, according to the last of three estimates of the gross domestic product. Record trade deficits weighed heavily on the measure, reflecting unbalanced global commerce still recovering from the COVID-19 pandemic and disrupted by the war in Ukraine. Adjusted for inflation, data from the Bureau of Economic Analysis shows the economy 3.5% ahead of where it was the year before and up 2.7% from the pre-pandemic peak. 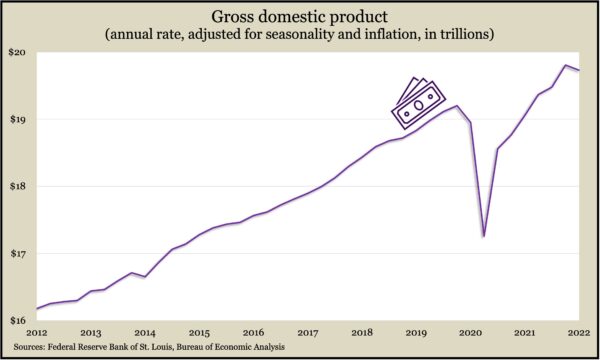 Consumer spending slowed in May as personal income remained steady, according to the Bureau of Economic Analysis. Personal spending accounts for about 70% of GDP and actually declined 0.4% when adjusted for inflation. On balance, personal saving rose slightly to 5.4% of disposable income, up from 5.2% in April, which was the lowest since 2009. The Federal Reserve Board’s favorite measure of inflation showed signs of easing in May, reaching a 6.3% year-to-year rate, the same as April but down from 6.6% in March. 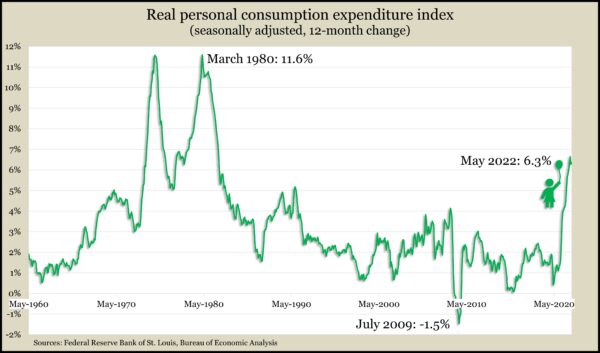 The four-week moving average for initial unemployment claims rose to its highest level since December. It has not declined since hitting an all-time low in early April. Even so,  Labor Department figures show the moving average 37% below the 55-year average, although it was 21% higher than it was just before the pandemic. More than 1.3 million Americans were claiming unemployment compensation in the latest week, up 1.3% from the week before but down from 14.7 million the year before.

The Commerce Department said construction spending dipped in May for the first time in eight months. The annual pace of such expenditures slowed 0.1% from an all-time high of nearly $1.8 trillion in April. The rate was still nearly 10% above its level the year before. Residential spending, which accounts for 53% of building outlays, rose 0.2% from April and was up 19% from May 2021. Public construction spending declined for both periods.

The Institute for Supply Management reported that its manufacturing index signaled expansion in June for the 25th month in a row, though at the slowest pace in two years. Based on surveys of purchasing managers, the index reflected easing in both supply chain congestion and hiring constraints. The trade group said the index suggested the overall economy was growing at a 1.5% annual pace after adjusting for inflation.