The Institute for Supply Management reported that its manufacturing index signaled expansion in December for the 19th month in a row, although at the slowest pace since last January. Based on surveys of purchasing managers, the index showed most components growing at a reduced rate, but hiring rose faster. Survey respondents said demand for goods remained strong while supply chains continued to bottleneck. The trade group said the index suggests annual U.S. economic growth of 4.4%.

A record number of U.S. employees quit their jobs in November, as demand for workers continued to far outstrip the number of job seekers. The Bureau of Labor Statistics said 4.5 million workers quit their jobs, which suggests they’re confident of finding better positions. At the same time, employers posted 10.6 million job openings, down 4.8% from October but up 56% from the year before. The margin between openings and unemployed job seekers grew to 3.7 million. 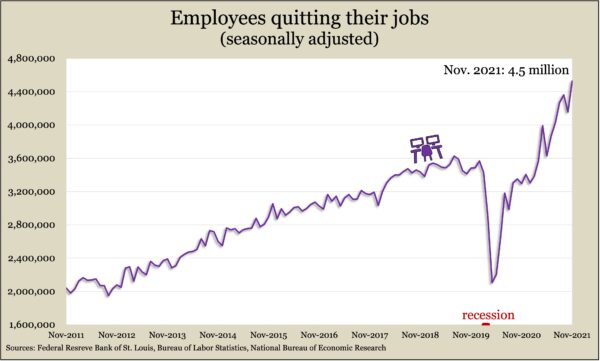 A report from the Commerce Department showed manufacturing orders gaining in November for the 18th time in 19 months. The value of orders rose 1.6% from October and was 17% ahead of November 2020. Excluding volatile orders for transportation equipment, orders rose 0.8% for the month and 14% from November 2020. A proxy for business investments was up 15% from the year before.

The four-week moving average for initial unemployment claims rose slightly but remained near a half-century low. Average claims were at 204,500, which was 2% below the low level just before the pandemic. The Labor Department said 1.7 million Americans were claiming unemployment benefits in the latest week, down 10% from the week before. A year ago, more than 20 million dislocated workers claimed benefits.

The U.S. trade deficit widened by 19% in November. The $80.2 billion deficit, which detracts from gross domestic product, resulted from the value of imports rising at a faster rate than exports. Imports were up 4.6% from October, while exports rose 0.2%. Year to year, the trade gap rose 29% to nearly $175 billion.

The U.S. services sector kept growing in December, though at a slightly slower rate after a record pace in November, according to the Institute for Supply Management. The trade group’s services index showed the 19th consecutive month of growth following setbacks in April and May of 2020. The pace of expansion slowed for most components of the index, but inventories shrank and prices rose at a faster pace.

U.S. employers added 199,000 jobs in December, about half as much as analysts expected. The gain compared to a monthly average of 537,000 in 2021, according to the Bureau of Labor Statistics. The job level remained 3.6 million or 2.3% below where it was in February 2020. Leisure and hospitality employers continued to add the most jobs, though they had 1.2 million, or 7.2%, fewer jobs than when the pandemic began. The same report showed the unemployment rate dropping to 3.9%, the lowest since 3.5% in February 2020. Of 5.7 million people not in the labor force but wanting a job, 1.1 million reported that the pandemic was preventing them from seeking a job. 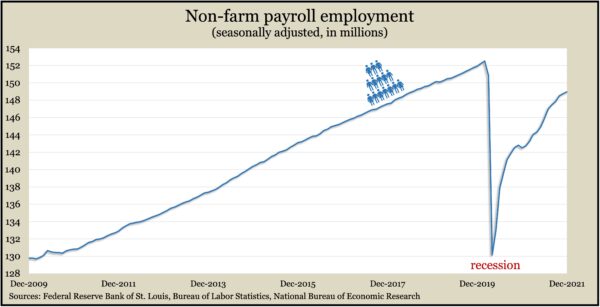