Despite a decline in the residential sector, U.S. construction spending rose in November for the second time in four months. The Commerce Department said construction expenditures rose 0.2% from October to an annual rate of $1.8 trillion, not far from the all-time peak in July, unadjusted for inflation. Spending on residential construction fell 0.5% from the October rate because of a 3% drop in expenditures on single-family home construction.

The Institute for Supply Management reported that its manufacturing index signaled contraction in December for the second month in a row. Based on surveys of purchasing managers, the index showed demand weakening and production falling, but it also suggested ongoing improvements in supply chains and a rebound in hiring. The trade group said it expects manufacturing to continue to flounder at least through the first quarter.

The U.S. labor market still exhibited strength in November as employers posted nearly 10.5 million job openings, far outnumbering the 6 million workers seeking a position. Postings declined marginally from October but were down for the sixth time in eight months following a record 11.9 million openings in March. The Bureau of Labor Statistics said nearly 4.2 million workers quit their jobs in November, which suggests they’re confident of finding better positions. In comparison, before the COVID pandemic, the highest number of quits was 3.6 million. 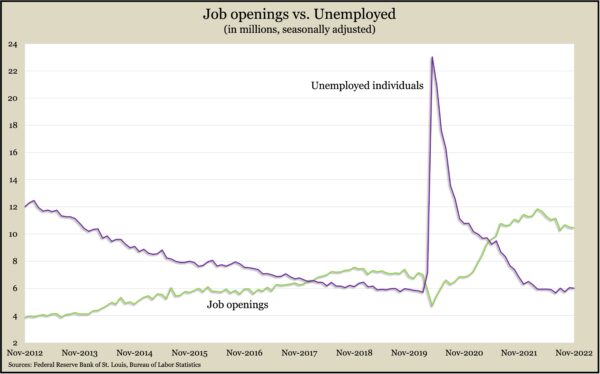 The four-week moving average for initial unemployment claims fell for the fourth week in a row, reaching its lowest level since mid-October. Data from the Labor Department showed the moving average of new filings down 42% from the 55-year average, although it was 11% higher than just prior to the pandemic. In total, 1.6 million Americans were claiming unemployment benefits in the latest week, down 1% from the week before and down from 1.9 million the year before.

In a sign of global economic slowdown, the U.S. trade deficit narrowed by 21% in November. The $61.5 billion deficit, which detracts from gross domestic product, resulted from the value of imports declining at a faster rate than exports. Imports were down 6.4% from October, as U.S. consumption weakened for items such as cell phones, automobiles and industrial supplies. Exports fell 2%, led by industrial supplies, pharmaceutical preparations and commercial aircraft. Year to year, the trade gap widened nearly 16%.

U.S. employers added 223,000 jobs in December, lower than the monthly average for 2022 (375,000) and 2021 (562,000), but still a sign of a steady labor market. The leisure and hospitality industry led in hiring, according to the Bureau of Labor Statistics, though it’s still more than 900,000 jobs (5.5%) shy of its mark just before the pandemic. Meanwhile, total employment edged 0.8% or 1.2 million jobs higher than in February 2020. Temporary help jobs – often a harbinger of overall hiring trends – fell for the fifth month in a row. The average hourly wage rose 4.6% from December 2021, the latest in a decline from a recent peak of 5.6% in May. The same report showed the unemployment rate dropping to 3.5% – the same as its mark at the outset of the pandemic. 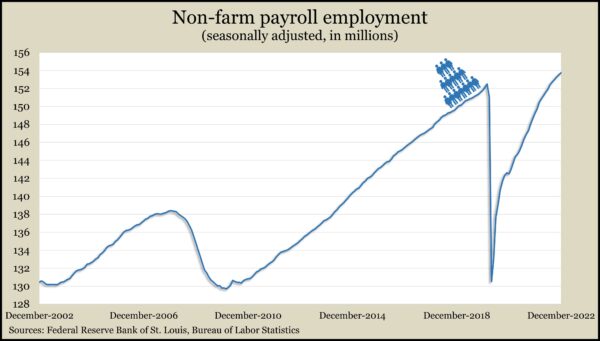 The U.S. services sector contracted in December, the first setback since May 2020, according to the Institute for Supply Management. The trade group’s services index showed both new orders and employment receding for the month. Purchasing managers surveyed blamed interest rates and inflation for a slowdown in demand. At managers also cited continued improvements in deliveries.

A report from the Commerce Department showed manufacturing orders declining in November for the first time in three months but only the second time in 14 months. The value of orders fell 1.8% from October and was 12% ahead of November 2021. Excluding volatile orders for transportation equipment, orders dropped 0.8% for the month and rose 11% from November 2021. A proxy for business investments was up 9% from the year before.