Increases in home prices continued to far outpace overall inflation in November. The S&P CoreLogic Case-Shiller home price index rose 18.8% from the year before, down from 19% in October and the third monthly deceleration since peaking at 20% in August. The recent slowdown in home price gains is the first since the very beginning of the COVID-19 pandemic. An analyst affiliated with the index said rising mortgage rates should affect price increases. 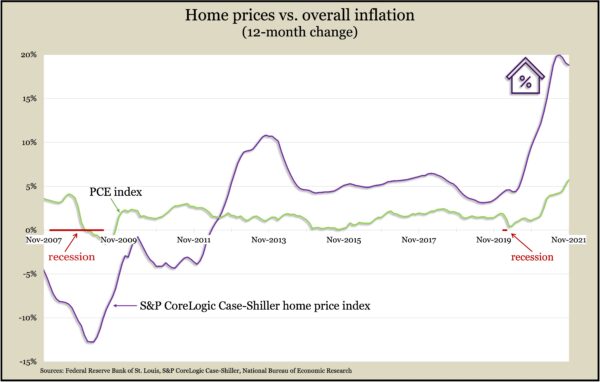 The Conference Board said its consumer confidence index declined in January for the first time in four months. Although consumers gave higher marks to current economic conditions, their outlook for the near-term economy fell. The business research group said the mixed signals suggested the economy entered 2022 on solid footing but the growth rate would moderate in the first quarter. An economist for the group cited the pandemic and rising prices as challenges to confidence and spending in the near term.

The U.S. economy rose at an annual pace of 6.9% in the fourth quarter, up from 2.3% in the previous three months. The Bureau of Economic Analysis said growth in consumer spending, business inventories and exports fueled the increase. On a full-year inflation-adjusted basis, gross domestic product rose 5.7% from 2020, the biggest increase since 1984. The average annual gain since records began in 1948 was 3.5%. 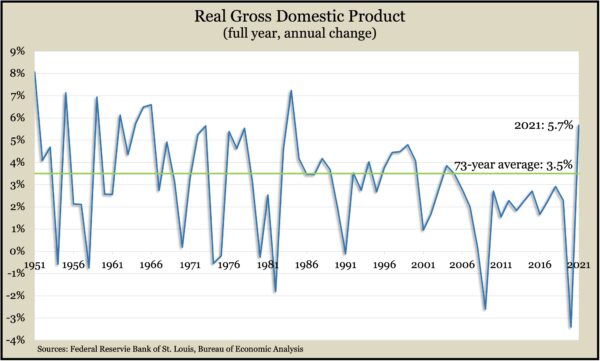 The four-week moving average for initial unemployment claims rose for the fourth week in a row after hitting a 52-year low around Christmas. Still, the average was under 25o,000 new applications, down from 5.3 million in April 2020 and 33% below the all-time average dating back to 1967. The Labor Department said 2.1 million Americans claimed jobless benefits in the latest week, down from 19 million the year before.

The National Association of Realtors said its index of pending home sales fell for the second month in a row, dropping 3.8% in December, largely because would-be buyers had fewer houses to choose. The trade group also blamed rising mortgage interest rates, which it contends will slow demand for housing in 2022. The group’s economist forecast that just under 6 million houses will be sold in 2022, which would be a decline of 2.8%

The Bureau of Economic Analysis said consumer spending fell 0.6% in December, the first decline since last February, even though personal income rose 0.3%, including a 0.7% gain in wages and compensation. A key driver of U.S. economic output, personal spending on goods fell for the month, while spending on services rose marginally. The personal consumption expenditures index, which the Fed follows for inflation, rose 5.8% from December 2020, the steepest incline since July of 1982. The monthly increase in the PCE was 0.4% in December, following two months at 0.6%.

The latest surge in pandemic cases and the highest inflation in 40 years are taking a toll on American consumers, according to the University of Michigan consumer sentiment index for January. The sentiment index hit its lowest point since November 2011, with consumers indicating their greatest concern is that inflation will keep rising faster than their incomes.