U.S. housing starts and building permits quickened pace in December, not as brisk as earlier in 2021 but still near their levels just after the 2006 housing bubble. The Commerce Department said the annual rate of housing starts exceeded 1.7 million units for the first time since March. Permits authorizing future construction rose to nearly 1.9 million, the most since last January. Critical construction of single-family houses, which could help alleviate ongoing supply issues for the housing market, continued to advance. In December, nearly 800,000 single-family residences were under construction. 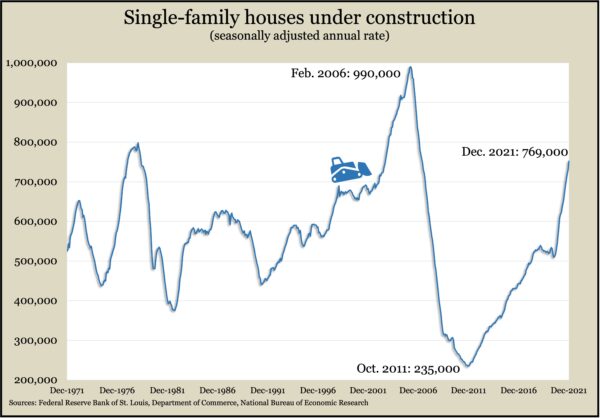 The four-week moving average for initial unemployment claims rose for the third week in a row after hitting its lowest level since 1969. Despite the recent uptick, the layoffs indicator shows employers remain reluctant to let workers go. The moving average of 231,000 claims was 38% below the all-time average dating back to 1967. The Labor Department reported 2.1 million ongoing claims for jobless benefits, up 9% from the week before, but down from 16.9 million the same time last year.

Full-year existing home sales reached the highest level since 2006. The National Association of Realtors said even though the pace of sales slowed in December, the full 2021 count of 6.12 million houses sold was up 8.5% from 2020. Sales rose as supply dwindled to 910,000 houses on the market at the end of December, the lowest inventory in 22 years of records. As a result of low supply and ongoing demand, the median sales price jumped, for the 118th month in a row, rising 15.8% from December 2020 to $358,000. An economist for the Realtors said rising mortgage rates will increasingly curb the enthusiasm of home buyers, but that should also help inventory increase, thus moderating price gains.

The Conference Board said its index of leading economic indicators rose 0.8% in December following 0.7% gains in both November and October. The slight acceleration suggests continued economic expansion into the first quarter of 2022, according to the business research group. Despite resistance from the omicron COVID variant, the tight labor market, inflationary pressures and expected interest rate increases, the Conference Board said the U.S. economy should grow at a 2.2% annual rate in the first quarter and 3.5% for all of 2022. The full-year growth rate would be both “robust,” the group said, and well above trends before the pandemic.