In another sign of slowing inflation, the Producer Price Index declined 0.5% in December, according to the Bureau of Labor Statistics. It was the first monthly slip in wholesale inflation since August and brought the year-to-year measure to 6.2%, the lowest since March 2021. For the month, prices declined for goods and rose slightly for services. Excluding volatile food, energy and trade services prices, the core PPI rose 0.1% from December, its weakest move since November 2020.

The Commerce Department said retail sales declined in December for the second month in a row and the third time in four months. The drop-off was widespread across retail categories, including bars and restaurants, but particularly noticeable among car dealers and furniture stores, which are especially vulnerable to rising interest rates. Only building supply centers and sporting goods stores had more sales in December. Adjusting for inflation, retail sales were up 12% since the onset of the pandemic in February 2020. 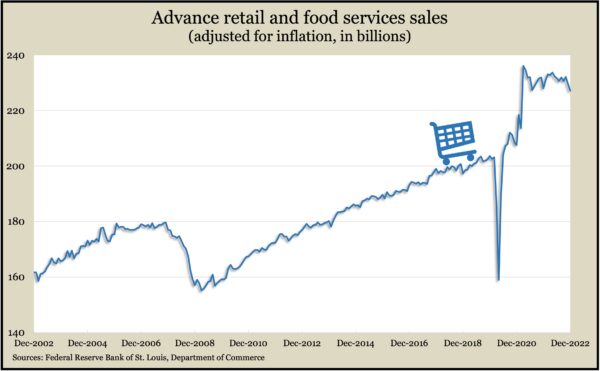 Industrial production also declined in December for the second straight month. The Federal Reserve Board said output from factories, mines and utilities fell 0.7% from November, which was 0.6% lower than October. Manufacturing production fell broadly across sectors with only defense and space equipment markets gaining. Industries’ capacity utilization rate – an indicator of inflation – sank for the third month in a row, dipping to its lowest level in a year and below its 50-year average for the second consecutive month.

The pace of U.S. housing starts and building permits continued to slow in December. Both activities dipped below pre-pandemic levels as higher interest rates and lower demand have discouraged developers and builders. The Commerce Department said the annual pace of permits declined nearly 2% from November and was down 30% from December 2021. Starts were down more than 1% from the month before and down 22% from the year before. As new construction slowed, completions outpaced starts, and the level of houses under construction hit a record high, based on data going back to 1970. 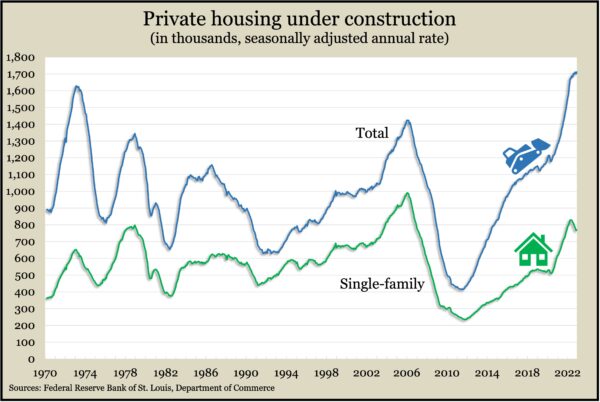 The four-week moving average for initial unemployment claims fell for the sixth week in a row to its lowest level since May. An indicator of employers’ reluctance to let workers go, the moving average was 44% below the average since 1967, according to Labor Department data. Meanwhile, total claims for jobless benefits rose 9% from the week before to 1.9 million. That was down from 2.3 million the year before and 16.9 million the year before that.

Full-year existing home sales reached just above 5 million, a 18% drop from 2021, which had been the highest level since 2006. The National Association of Realtors said limited supply and high mortgage rates slowed sales by 1.5% from November, the 11th decline in a row. But the trade group also said it expected sales to pick up soon because inventories were up about 10% from the year before and mortgage rates have been receding since a recent peak above 7% for  a traditional loan in November. The median sales price rose 2.3% from the year before to $366,900, the 130th consecutive year-to-year gain.