The broadest measure of inflation showed prices rising at the fastest annual pace since 1982. The Consumer Price Index rose 7% in the 12 months since December 2020, though the 0.5% gain from November was the lowest in three months. A 50% year-to-year increase in gasoline prices contributed to high inflation, as did a 37% increase in used vehicle prices. The Bureau of Labor Statistics said gas prices declined from November. The core CPI, which excludes volatile prices for food and energy, rose 5.5% from December 2020, the largest increase since 1991. 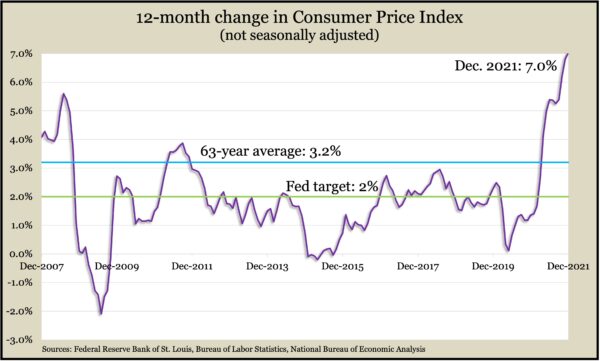 The four-week moving average for initial unemployment claims rose for the second week in a row after hitting its lowest point since 1969. Considered an indicator of layoffs, the average reached 210,750 claims in the latest week, which was 43% behind the average since 1967 and down from a record high of 5.3 million in April 2020. The Labor Department said 1.9 million Americans claimed jobless benefits the week of Christmas, the latest date available. That was up 13% from the previous week but down from 19.4 million the year before.

The Bureau of Labor Statistics showed wholesale inflation remained high in December, although there were some hints that it might be easing. The Producer Price Index rose 0.2% in December, down from a 1% gain in November and the smallest increase in 13 months. The year-to-year inflation rate was 9.7%, down from 9.8% in November, the highest in 10 years of data. The price index for goods fell for the first time since April 2020, led by a 6% decline for gasoline. Excluding volatile prices for energy, food and trade services, the so-called core PPI rose 0.4% from November and gained 6.9% from December 2020. The one-year rate was unchanged from November and up from 1.3% in 2020.

Facing surges of inflation and COVID-19, and following earlier-than-usual shopping to combat supply-chain delays, retail spending declined 1.9% in December. The drop-off was widespread. Ten of 13 retail categories posted lower revenue in December, the Commerce Department reported. Compared to the year before, retail spending rose 16.9%. It was up 19.2% since the pandemic began, resulting in a monthly average of 0.9%, more than double the monthly rate of retail spending movement in the previous 20 years. 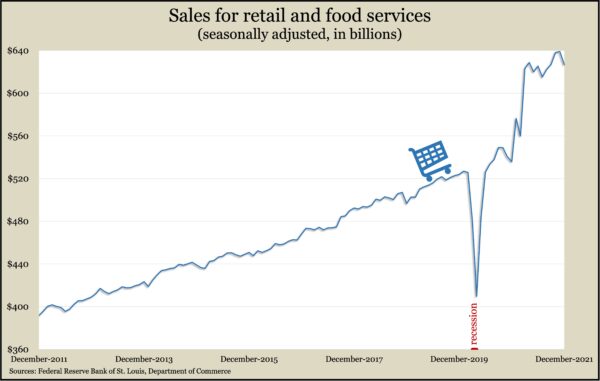 The Federal Reserve said industrial production contracted by 0.1% in December, the first decline in three months. Production was up 3.7% from December 2020 and 0.6% ahead of its level just before the pandemic. Manufacturing output fell 0.3% from November, including a 1.3% setback in automotive manufacturing. Utilities’ output declined because of unseasonably warm weather, while the mining sector grew through expanded oil and gas production. Capacity utilization, a measure of potential inflation, fell to 76.5%, compared to a 50-year average of 79.6%.

A preliminary December reading of consumer sentiment resulted in the second-lowest level in a decade, according to the University of Michigan. The survey-based index dropped to 68.8 from 70.6 at the end of December. The index hit a 10-year low of 67.4 in November. An economist with the survey cited the omicron COVID variant and inflation as reasons for consumers’ gloomier outlooks. One third of respondents said their finances were worse than the year before, which was only slightly higher than in April 2020, at the onset of the pandemic and lockdowns.