The manufacturing sector continued expanding in January, though at a slower rate, according to the Institute for Supply Management. The trade group’s index, based on surveys of industry purchase managers, decelerated for the third consecutive month but continued to signal growth, as it has every month since April 2020. Survey respondents reported for the third month in a row that delivery bottlenecks were easing. Amid strong demand, manufacturers said hiring and production has been hampered by COVID-19, quits and retirements.

The gap between the number of job openings and unemployed job seekers reached a record high of 4.6 million in December. According to a Bureau of Labor Statistics report, employers posted 10.9 million job openings, which continued to outnumber active job hunters. Hotels and restaurants had the most postings. Both the number and rate at which Americans lost jobs through layoff or discharge were at all-time lows. In December, 4.3 million workers quit their jobs, down from a record 4.5 million in November. 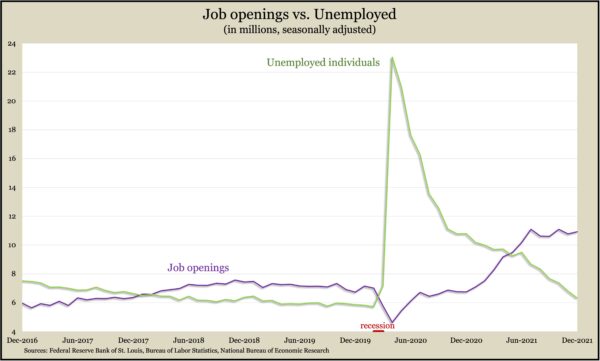 Housing led a 0.2% increase in construction spending in December, reaching a seasonally adjust annual rate 0f $1.64 trillion, an all-time high, not adjusted for inflation. The Commerce Department said residential construction spending rose 1.1% from the month before and 14.7% from December 2020. Spending on single-family housing outpaced increases for multiple-household dwellings.

The four-week moving average for initial unemployment claims rose for the fifth week in a row after hitting a 52-year low. Reflecting employer resistance to letting workers go, the moving average was 31% below the four-week average since records began in 1967. The Labor Department said 2.1 million Americans claimed jobless benefits overall in the latest week, down 3.4% from the week before and down from 18.5 million the year before.

The Bureau of Labor Statistics said worker productivity rose at an annual rate of 6.6% in the fourth quarter. The swift pace resulted from a 9.2% rate increase in output and a 2.4% rise in hours worked. On average, productivity rose 1.9% in 2021. Since the end of 2019, just before the pandemic, output has risen 4.1% while hours worked declined 0.9%.

The non-manufacturing sector of the U.S. economy kept growing in January, although at a slower pace. The Institute for Supply Management said its services index suggested expansion for the 20th month in a row after contracting in April and May 2020 for the first time in 11 years. Although expanding at a slower rate for the second consecutive month, the index continued to show strong growth. The trade group said its surveys of purchase managers portray a sector driven by demand but challenged by pandemic-related limits on supply chains and staffing.

The Commerce Department said factory orders declined 0.4% in December, the first setback in eight months. Orders were up 16.9% from the end of 2020. The monthly decline was led by transportation equipment, including motor vehicles and commercial aircraft. Excluding transportation, orders rose 0.1% from November and were up 14.3% from the year before. A proxy for business investments rose 15% from its year-earlier level.

The U.S. labor market showed continued strength in January despite a surge in COVID cases, adding 467,000 jobs, according to payroll data from the Bureau of Labor Statistics. The bureau revised November and December numbers to show that employers added 709,000 more jobs in those months than previously reported. Payroll remains 2.9 million jobs or 1.9% lower than in February 2020, just before the pandemic. Leisure and hospitality employers added the bulk of jobs in January but are still 1.8 million or 10% lower than their pre-pandemic level. The unemployment rate rose to 4% from 3.9% in December, down from a record 14.7% in April 2020 but up from 3.5% just before the pandemic. According to household surveys, the pandemic forced 6 million people out of work in January, up from 4.7 million in December; it prevented 1.8 million people from looking for jobs, up from 1.1 million in December. 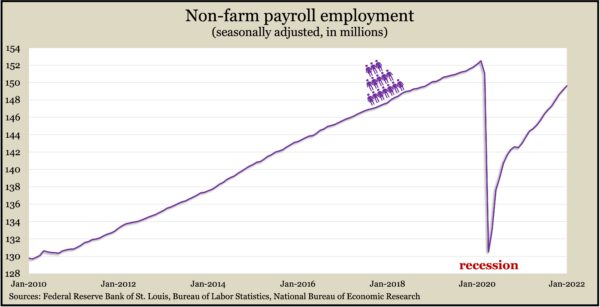