The U.S. economy appears to be headed for gradual acceleration in the first half of 2021, according to the Conference Board’s index of leading economic indicators. The business research group said the index gained 0.5% in January with broad gains across its 10 categories. Based on the index, the Conference Board forecast a 4.4% rise in gross domestic product for 2021, compared to a 3.5% decline in 2020.

Housing prices continued to increase, accelerating for the seventh month in a row to a double-digit gain in the 12 months ended in December. Year-to-year comparisons from the S&P CoreLogic Case-Shiller index showed a 10.1% December increase for the 20-city composite, up from 9.2% in November. An analyst for S&P described the gains as broad, with 18 of the 20 cities experiencing accelerating housing prices. Data suggests that more buyers are moving from urban apartments to suburban houses. The analyst said it’s too early to tell whether the trend is a result of the pandemic or if it would have happened over the next several years anyway.

The Conference Board reported a rise in its consumer confidence index in February with the first increase in current-conditions assessments in three months. Consumers remained overall optimistic, though cautious, about the outlook for the U.S. economy, the business research group reported. In particular, more consumers mentioned plans to travel for vacation, including by air and abroad. The Conference Board said such optimism stood to improve with the progress of COVID-19 vaccinations.

The Commerce Department said the pace of new-home sales picked up in January for the second month in a row. The annual rate of 923,000 houses sold was up 4.3% from December and up 19.3% from January 2020, although it fell shy of the 979,000-house pace in July, which was the highest in 14 years. Tight supplies continued to push up prices, with the median new home price rising 5.3% from the year before to $346,000.

The Commerce Department said durable goods orders rose 3.4% in January, the ninth consecutive gain after the pandemic disrupted global demand, supply chains and factory operations. January marked the second month in a row that orders topped the pre-pandemic peak, rising 4.5% from the year before. A proxy for business investments rose 8.3% from January 2020, suggesting companies have been adjusting to the impacts of the pandemic.

The four-week moving average for initial unemployment insurance claims declined for the third week in a row but remained historically elevated as staffing continued to suffer from the pandemic. About 19 million Americans received jobless benefits in the latest week, up from 2.1 million the year before. Labor Department data shows the four-week average remained above the previous peak in the 53 years before the pandemic.

The U.S. economy rose at a slightly faster pace than initially estimated in the fourth quarter, with gross domestic product expanding at a 4.1% annual rate. The Bureau of Economic Analysis said consumer spending, which drives about 70% of economic activity, rose at an annual rate of 2.4% from October through December, down from an initial estimate of 2.5%. For all of 2020, the economy shrank by 3.5%. Adjusted for inflation and seasonality, GDP was down 2.4% from its per-pandemic high but up 8.6% from its mid-year low. 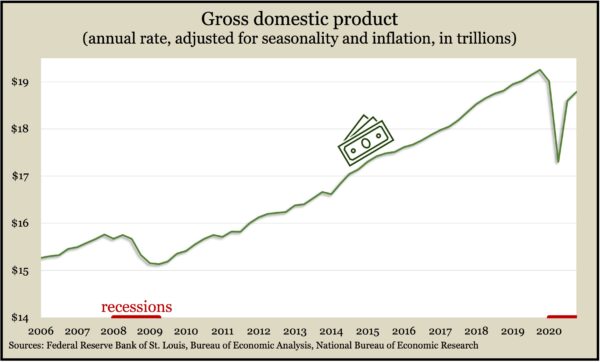 The Bureau of Economic Analysis showed consumer spending rising in January for the first time in three months. Expenditures increased 2.4% while personal income rose 10%, mostly because of federal stimulus to households and through unemployment compensation. Overall consumer spending came within 0.4% of its level last February, before widespread pandemic closings plunged the economy into recession. With income rising much faster than spending, the personal saving rate jumped to 20.5%. The Federal Reserve’s main gauge of inflation stayed below the target  of 2%.

A precursor to spending, consumer sentiment, ticked up slightly from mid-February but ended the month lower than in January because of diminished expectations. In particular, households earning less than $75,000 doubted how quickly the employment market would recover to its pre-pandemic vigor, according to the University of Michigan. The university’s survey found increased expectations for inflation but said such fears have not reached the level of a self-fulfilling prophecy.