Inflation on the wholesale level rose 1% in January, another sign from the Bureau of Labor Statistics of heightened demand and supply-chain constraints amid the pandemic. The Producer Price Index rose at the fastest clip since May and was up 9.7% from January 2021, though that was lower than the 12-month pace in December and November. For the month, demand rose 1.3% for goods and 0.7% for services. A core rate of wholesale inflation, stripping out volatile prices for food, energy and trade services, rose 0.9% for the month and 6.9% from the year before. 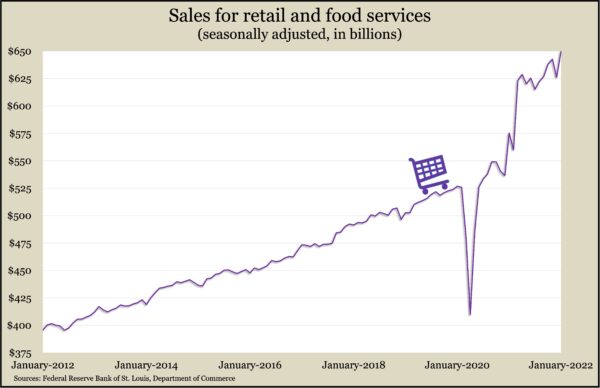 The Federal Reserve reported continued gains in industrial production in January, boosted by weather-related surges among utilities. Production rose 1.4%, the third increase in four months, with utilities growing 9.9% as an extraordinarily cold January followed an unseasonably warm December. Total output was up 4.1% from the year before and reached 2.1% ahead of where it was just before the pandemic. Industrial capacity utilization rate rose to 76.6%, the highest since March 2019 but still considerably below the 50-year average rate of 79.5%.

The Commerce Department delivered mixed signals on housing in January, when the annual rate of single-family building permits rose and housing starts declined. Permits, which indicate plans for future construction, rose to the highest rate since May 2006. However, housing starts slipped 4.1% from the December rate, with starts for single-family houses declining 5.6%. At the same time, 785,000 single-family houses were under construction in January, the highest rate since April 2007. Lack of housing stock has sent home prices soaring far beyond overall inflation levels. 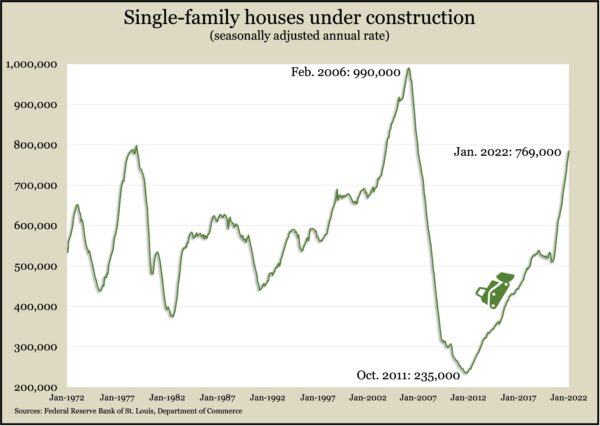 The four-week moving average for initial unemployment claims declined for the second week in a row, dipping 34% below the 55-year average. An indication of employers’ reluctance to let go of workers, the rolling average reached its lowest point since 1969 in December. Total jobless claims fell 1.7% in the latest week to nearly 2.1 million. That’s down from 18.9 million the year before.

With mortgage rates starting to rise, existing home sales rose 6.7% in January to an annual rate of 6.5 million houses, which was 2.3% behind the year-ago pace. The National Association of Realtors said inventories reached a record low of 860,000 houses, about 1.3 months of stock at current sales rates. As a result, the median sales price rose to $350,000, up 15.4% from the year before and the 119th consecutive month of year-to-year price increases.

U.S. economic growth slowed in January, according to a 0.3% decline in the Conference Board’s index of leading economic indicators. The business research group cited weaker signals from jobless claims, consumer outlook, stock prices and hours worked in manufacturing. It blamed the setbacks on the omicron variant, rising prices and continued kinks in supply chains. At the same time, the Conference Board pointed to “widespread strengths” among the indicators and forecast a lower, though still robust, 3.5% increase in  GDP compared to the first quarter on 2021.