The Federal Reserve reported a 5.9% rise in consumer debt outstanding in 2021, including a 6.6% increase in credit card debt. Credit card debt rose $75 billion or 7.8% since hitting a four-year low in January 2021. The level was still $59 billion or 5.4% short of where it peaked just before the COVID-19 pandemic. An indicator of consumer confidence, credit card debt stood about where it was in mid-2017. It took nearly a decade for credit card debt to recover from the Great Recession. 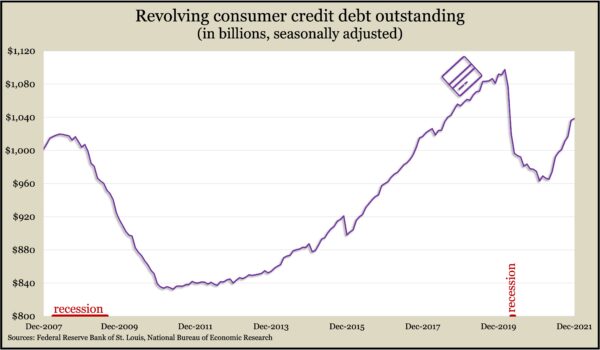 The U.S. trade deficit rose 1.8% in December as imports led by cell phones, cars and crude oil outpaced exports including pharmaceutical preps, automotive parts and plane engines. The Bureau of Economic Analysis said the full-year deficit widened 27% to a record $859 billion, reflecting the continued uneven recovery from the global recession triggered by the pandemic. Since 2020, the value of imports into the U.S. rose by 20.5% while exports to other countries grew by 18.5%.

The four-week moving average for initial unemployment claims declined for the first time in six weeks, which was the lowest level since 1969. Data from the Labor Department shows the latest four-week average was 32% below the all-time average, though still 21% higher than the low point just before the pandemic began. More than 2 million Americans were claiming jobless benefits in the latest week, up 1.5% from the week before but down from 20.2 million the year before.

The broadest measure of inflation showed 12-month price increases rising in January to their highest level in decades. The Consumer Price Index rose 0.6% from December, the same gain as in December, but down from 0.7% in November and 0.9% in October. Year to year, inflation rose 7.5%, the most since February 1982. Top drivers of the price hikes: Groceries, electricity, housing rents and used cars. Excluding volatile costs for energy and food, the index was 6% higher than in January 2021, the highest one-year increase since August 1982. 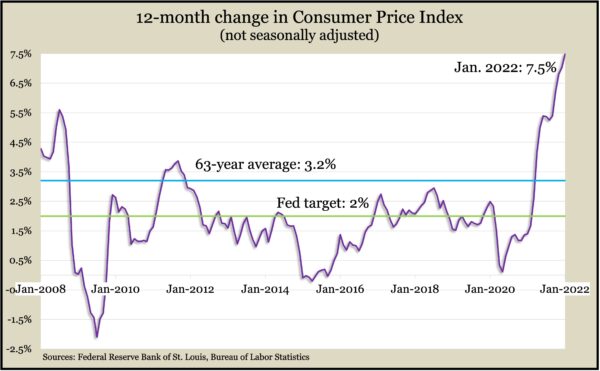 The University of Michigan said consumer sentiment slipped from the end of January to its lowest level in a decade. Inflation expectations weighed down consumer outlooks, with nearly half of the households surveyed saying they expect their inflation-adjusted incomes to decline in the next year. Consumers reporting rising personal wealth dropped to the lowest level since May 2020, largely because of falling expectations for stock price increases in 2022.