The U.S. services industry expanded for the 30th month in a row in November, and at a faster rate, the Institute for Supply Management reported. The ISM services index showed the pace of growth accelerating for the first time in three months. Index components for business activity and employment drove the increase, while growth in new orders slowed slightly. The trade group said the index suggested the overall U.S. economy was growing at an annual pace of 2.3%.

The manufacturing sector also showed ongoing strength, with factory orders for October growing for the 12th time in 13 months. The Commerce Department reported broad gains led by transportation equipment – particularly aircraft and automotive products. Compared to the same time last year, factory orders were up nearly 13% – just below 12% excluding transportation. Orders for core capital goods, a measure of business investment, rose in October and was up more than 9% from October 2021.

The U.S. trade gap widened 5.4% to $78.2 billion in October. The value of exports shrank from September by 0.7% with declines in sales abroad of natural gas, oil products and pharmaceuticals. Meanwhile, imports rose 0.6% with increased purchases of industrial materials and cars. The Bureau of Economic Analysis said the trade deficit, which detracts from measures of economic output, grew 20% through the first 10 months of 2022 compared to the same period in 2021.

The Bureau of Labor Statistics said worker productivity rose at an annual rate of 0.8% in the third quarter, up from an earlier estimate of a 0.3% gain. The annual growth rate for output rose 3.3% in the quarter while the pace of hours worked rose 2.5%. Measuring year over year, productivity slipped 1.3%, the third consecutive decline. Since the third quarter of 2021, output rose 2.1% while hours worked increased 3.4%. The report showed unit labor costs rising 5.3% from the year before. Adjusted for inflation, hourly compensation fell 4% in the latest 12 months, the biggest drop in 74 years of data.

The Federal Reserve Board reported a 19th consecutive rise in consumer credit card debt outstanding in October. Total debt, including vehicle financing and student loans, rose at a 6.9% annual rate from September, but revolving credit, which mostly reflects credit cards, gained at a rate of 10.4%. The level of credit card debt suggests consumers’ willingness to spend. In October, it was more than $71 billion or 6% above where it was just before the pandemic. The indicator took two years to recover from the COVID recession, vs. a decade-long recovery from the financial collapse and Great Recession. 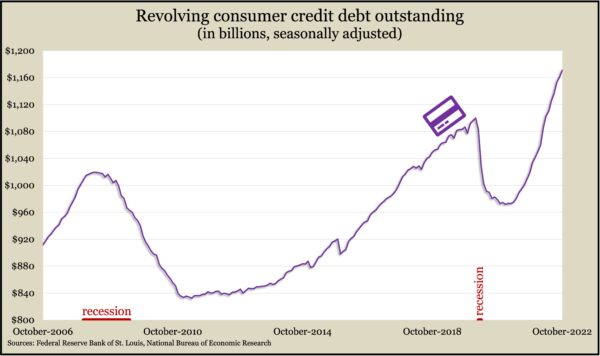 The four-week moving average of initial unemployment claims continued to reflect a slight weakening of a historically strong labor market. The Labor Department reported an uptick in the average for the fourth week in a row. Only once in the previous 10 weeks did initial claims decline. Still, the moving average is 38% below its 55-year average, suggesting the reluctance of employers to let workers go. Just under 1.3 million Americans claimed jobless benefits in the latest week, down 6% from the week before, compared to 1.9 million the year before.