As mortgage rates have risen amid Federal Reserve Board efforts to restrict lending, the pace of building permits and housing starts slowed dramatically in November. The Commerce Department said new construction dipped 0.5% from the annual rate in October and was down 16% from November 2021. Starts for single-family units hit the lowest point since May 2020. Permits were 22% off the year-ago pace, with single-family authorizations also at a two-and-a-half-year low. Despite the drop in permits and starts, housing under construction remained at the highest level in 52 years of data. 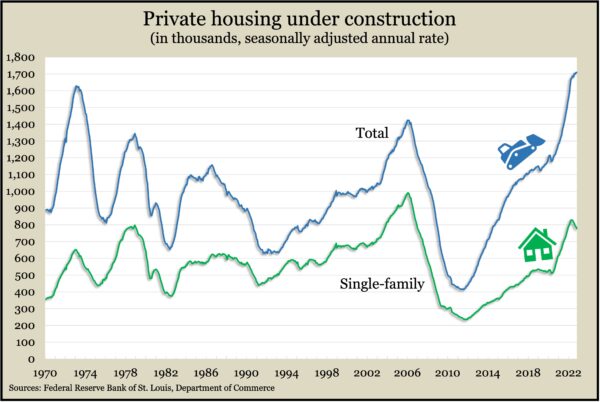 The Conference Board said its consumer confidence index rose in December for the first time in three months, but expectations remained at a level suggesting economic recession. The business research group said attitudes rose toward both current conditions and what may be ahead. Price drops in gasoline helped lower inflation expectations to their lowest point in 15 months.

Existing home sales declined 7.7% in November to an annual rate of 4.1 million houses, down 35% from the year before, the National Association of Realtors said. The sales pace fell for the 10th month in a row. The trade group said higher mortgage rates discouraged both buyers and sellers, with inventories shrinking for the fourth month  near a record low. The median sales price of $370,700 was up 3.5% from November 2020, marking the 129th consecutive year-to-year increase.

The U.S. gross domestic product grew at an annual pace of 3.2% in the third quarter of 2022, according to a final estimate by the Bureau of Economic Analysis. The economic growth rate was up from 2.9% in the preliminary report as consumer spending rose at a faster pace than initially estimated. Correcting for inflation, the economy grew 2% from the year before and was 4% above its pre-COVID peak. The Federal Reserve’s favorite measure of inflation showed a 4.3% increase since the third quarter of 2021, more than double the Fed’s long-range target of 2%.

The four-week moving average for initial unemployment claims fell for the second week in a row after four consecutive gains. Data from the Labor Department showed the gauge of employers’ willingness to dispose of workers at 4o% below the long-term average. Total jobless claims dropped 3% in the latest week to 1.5 million, down from 2.1 million the year before and 21 million the year before that.

The Conference Board’s index of leading economic indicators declined 1% in November, with stock prices making the only positive contribution for the month. The index dropped 3.7% since May, as opposed to a 0.8% decrease in the previous six months. The business research group said the Federal Reserve Board’s interest rate cuts are slowing the economy, especially in housing, and likely will result in a recession spanning from early through mid-2023.

By far the biggest driver of the U.S. economy, consumer spending gained 0.1% in November, the smallest of four consecutive increases. Adjusted for inflation, spending was unchanged from October as consumers bought fewer goods but slightly more services. The Bureau of Economic Analysis reported that personal income rose 0.4% in November, which meant spending didn’t outpace income for the first time in four months. The Fed’s favorite inflation gauge showed a 5.5% increase from November 2021 – the lowest in 13 months. 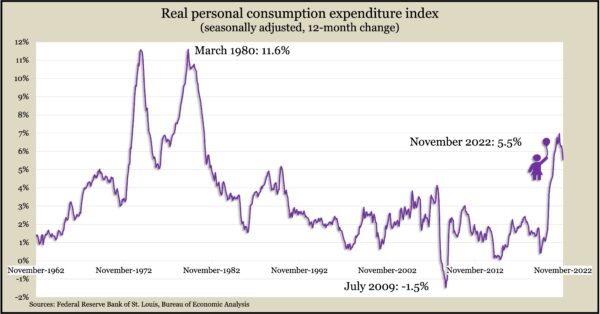 The Commerce Department said orders for durable goods sank 2.1% in November, the first decrease in four months. The indicator for manufacturing demand was up 10.5% from November 2021. Commercial aircraft and automotive led the monthly decline. Excluding transportation equipment, orders rose 0.2% from October and were nearly 7% above their year-ago level. Core capital goods orders, a proxy for business investments, rose 0.2% for the month and were up 8.8% from the year before.

The Commerce Department said the annual pace of new home sales rose 5.8% in November, though it still was down 8.5% from the year before. The volatile indicator was below its pre-COVID pace for the eighth month in a row with only the Midwest increasing sales for November. The median price rose 9.5% from the year before to $471,200.

The University of Michigan’s consumer sentiment index rose in December as households felt less pressure from inflation. Although the index reading was up 5% from November, it was down 15% from the year before. Expectations were down 12% from the December 2021 index while opinions toward current conditions fell 20% from the year before. The longstanding survey showed consumers’ inflation expectations at the lowest level in 18 months.