The broadest measure of inflation continued to ease in November, declining on a year-to-year rate for the fifth month in a row. The Bureau of Labor Statistics said its Consumer Price Index added 0.1% from October and was up 7.1% from November 2021 after a 40-year high of 9.1% in June. Inflation remained near 1982 levels and far above the Federal Reserve Board’s long-range target of 2%. Shelter costs accounted for most of the monthly increase while the price of gasoline got cheaper. Excluding volatile costs for energy and food, the core 12-month inflation rate was 6%, a second monthly decline since hitting a 40-year high of 6.6% in September. 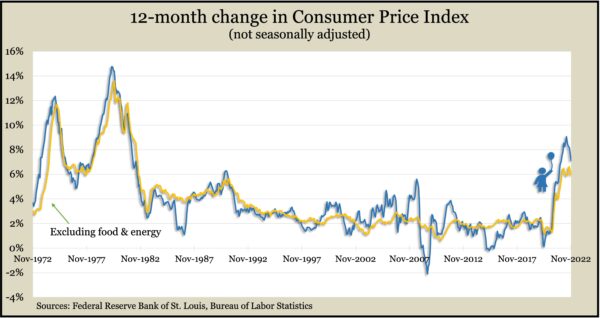 The policy-making committee of the Federal Reserve Board announced a unanimous decision to raise short-term interest rates another half a percentage point. It was the Fed’s seventh hike this year in its attempt to lower economic demand and ease inflation. The half-point increase was down from recent moves of three-quarters, but the Federal Open Market Committee said it expects more raises ahead.

The Commerce Department reported a 0.6% decline in retail sales in November, following a 1.3% gain in October. The drop was broadly distributed: Nine of 13 major categories had lower sales in November, including car dealerships, furniture stores, appliance centers and home-and-garden centers. Consumer spending rose notably at grocery stores and bars and restaurants. Compared to November 2021, only two retail categories had lower sales: Furniture stores and appliance centers. Adjusted for inflation, retail sales fell 0.7% in November, the fifth decline in seven months. 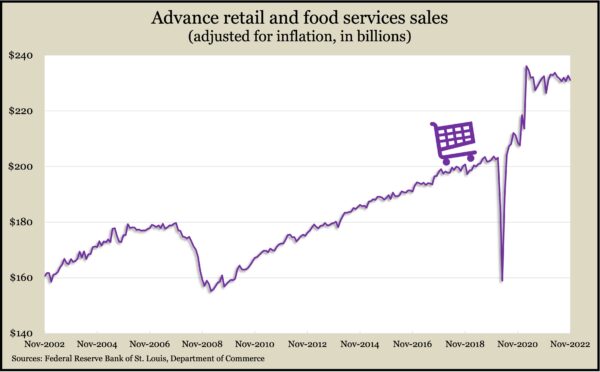 The four-week moving average for initial unemployment claims fell for the first time in six weeks but still close to 40% below its 55-year average. Although data can be marginally affected by seasonal downtime, including around Thanksgiving, the Labor Department reported total claims rising 24% from the week before to nearly 1.6 million. That’s down from almost 2.5 million the year before, suggesting employers’ reluctance to let workers go.

U.S. industrial output fell 0.1% in November, its second drop in a row and the third in four months. The Federal Reserve reported a broad decline in industrial production, led by manufacturing — particularly automakers. Factory output had advanced in the four previous months. Overall industrial production was up 2.5% from the year before. Reflecting the monthly drop in production, the capacity utilization rate fell for the second month in a row, reaching its lowest level since June but still up slightly from its long-term average. The capacity utilization rate is an indicator of inflationary pressure.