The U.S. trade gap narrowed 18% to $67.1 billion in October from a record $81.4 billion in September. Exports far outpaced imports as supply-chain disruptions hampered goods coming into U.S. markets. The Bureau of Economic Analysis said the value of exports rose 8% in October, while imports rose by less than 1%. Through the end of October, the trade deficit widened 30% from year before, with exports rising 18% and imports rising 21%.

The Bureau of Labor Statistics said worker productivity declined at an annual rate of 5.2% in the third quarter, the biggest setback since 1960. The annual growth rate for output rose 1.8% in the quarter while the pace of hours worked rose 7.4%. Since the third quarter of 2021, productivity fell 0.6%, the biggest decline since 1993. The report showed increased productivity through the first seven quarters of the pandemic, with output growing 1.8% while hours worked fell 1%.

The Federal Reserve Board reported a sixth consecutive rise in consumer credit card debt outstanding in October. Total debt, including vehicle financing and student loans, rose at a 4.6% annual rate from September, but revolving credit, which mostly includes credit cards, gained at a rate of 7.8%. The level of credit card debt suggests consumers’ willingness to spend. In October, it was still more than $80 billion or 7% below where it was just before the pandemic. 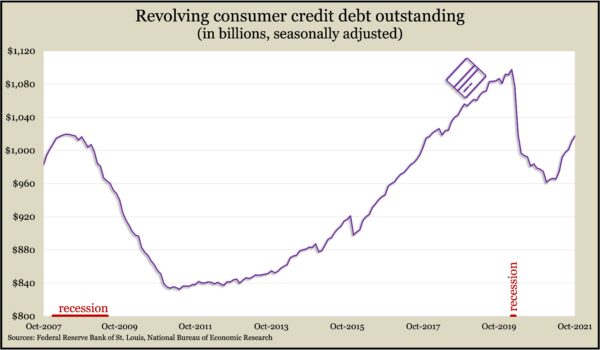 U.S. employers posted a near-record 11 million job openings in October, ticking up for the first time in three months. Data from the Bureau of Labor Statistics showed demand for workers continued to outpace the number of Americans out of work and seeking jobs. Hiring remained steady, while layoffs and firings changed little from September. About 4.2 million workers quit jobs in October, indicating the confidence workers have in finding new positions. In September, a record 4.4 million workers quit.

The four-week moving average of initial unemployment claims continued to reflect the tight labor market, falling for the ninth week in a row to within 5% of its low point just before the pandemic. The average dipped 41% below the 54-year average, according to  Labor Department data. The latest week of claims was the lowest since September 1969. Just over 1.9 million Americans claimed jobless benefits in the latest week, down 15% from the week before, compared to 19.6 million the year before.

The broadest measure of inflation rose 0.8% in November, down from 0.9% in October. Price gains were broad and led by a 6.1% jump in gasoline prices and a 2.5% increase for used cars. The Bureau of Labor Statistics said its Consumer Price Index grew at a 12-month rate of 6.8%, the highest since June 1982. Year to year, gas prices rose 58% and used car prices rose 31%. Excluding volatile prices for food and energy products, the core CPI rose 4.9% from November 2020, its widest one-year advance since June 1991. 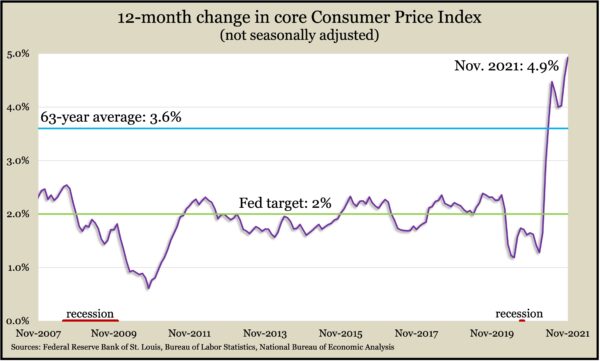 Consumer sentiment rebounded slightly from December and is on par with household outlooks since August, the University of Michigan reported. A preliminary look at survey data for December showed a remarkable disparity between the relative optimism of lower-income families and pessimism among middle- and upper-income respondents. A university economist said expectations for pay raises among the lowest third of earners were the highest since 1991. About one in four respondents overall reported that higher prices were eroding their living standards.