Non-manufacturing expanded for the 114th consecutive month in July, although slowing in pace for the second month in a row, according to the ISM Non-Manufacturing Index. Most of the components of the index weakened, except for employment. Purchase managers surveyed for the index said they continue to be concerned about trade policies and employment resources. Based on the index, the Institute for Supply Management said the economy is growing at a 1.8% annual rate.

American employers continued to have more job openings than the nation had unemployed job seekers in June. The Bureau of Labor Statistics reported nearly 7.4 million openings, down 0.5% from May. That was almost 1.4 million more than the number of unemployed persons in June. Openings have outnumbered the unemployed for 16 months in a row. 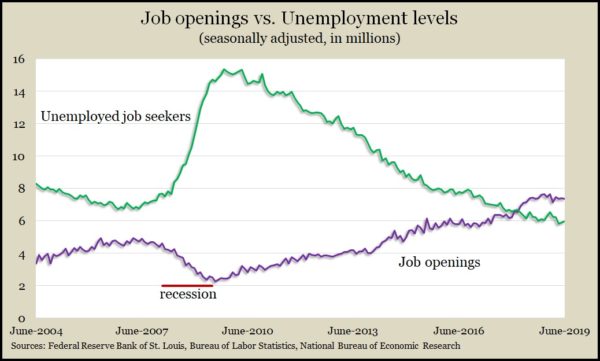 The level of credit card debt contracted in June for the second time in four months, according to a Federal Reserve Board report on consumer debt outstanding. Economists use credit card debt as a sign of consumer spending, which accounts for nearly 70% of U.S. economic activity. Credit card debt declined at an annual rate of 0.1%. Total debt rose at a 5.8% pace driven by car loans and school financing.

The four-week moving average for initial unemployment claims rose for the first time in five weeks, still remaining near 50-year lows and staying 40% below the all-time  average. Data from the Labor Department suggest the persistent strength of the employment market, which should encourage more consumer spending.

In a sign that companies continue to let supplies outpace demand, wholesale inventories stayed level in June while sales edged 0.3% lower. Year-to-year, inventories rose 7.6% while sales declined 0.2%. The Commerce Department reported that the inventories-to-sales ratio remained near the highest level since the Great Recession.

Inflation on the wholesale level remained subdued in July, according to the Bureau of Labor Statistics. Excluding volatile costs for food, energy and trade services, the Producer Price Index rose 1.7% from July 2018, the lowest level since late 2016. The so-called core rate declined 0.1% from June and stayed below the 2% overall inflation target at which the Federal Reserve says economic growth would be at a sustainable pace.