Housing construction data showed declines in July amid the rising costs of financing. Both building permits and housing starts dropped to slower paces, with permits down 1.3% from June and starts down 9.6%. Both indicators hovered at elevations before the Great Recession, with single-family housing falling off more than multi-unit structures. The same report from the Commerce Department revealed a relatively healthy home building market with the number of houses under construction near an all-time high in more than 52 years of data. 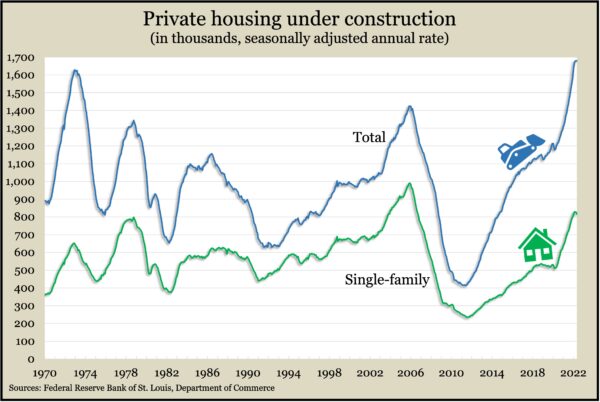 The Federal Reserve reported a 0.6% gain in industrial production in July, led by manufacturing. Auto makers increased their output by 6.6% for the month. Excluding their contribution, manufacturing production rose 0.3%. Total industrial production advanced nearly 4% from the year before, with manufacturing up 3%, mining up nearly 8% and utilities up 2%. Industries’ capacity utilization rate, an inflation indicator, rose to 80.3%, its highest level in four years. The 50-year average for capacity utilization is 79.6%.

The Commerce Department reported Retail sales in July were essentially flat from the prior month. Excluding gasoline and auto sales, retail sales rose 0.7% in July from June. Retail sales were 10.3% higher than July 2021.

The Labor Department reported that the four-week moving average for initial unemployment claims was down from the prior week and remains significantly lower than the 33-year average (about 1/3 lower). Continued signs of broad strength in the labor market.

The Conference Board said its leading economic indicators index has fallen 1.6% from January to July 2022. Conference board projects U.S. economy will not expand in Q3 and “could tip into a short but mild recession” by year end or early 2023.

Existing home sales declined 5.9% from the prior month and 20.2% from a year ago in July. Buyers continue to be sidelined by higher mortgage rates and already high prices as well as the reduced value of other investments. The 30-year fixed Mortgage Rate was still above 5%, but below the 5.8% Mid-June peak.