Manufacturing resumed its expansion in March, with durable goods orders rising 0.5% from February, according to the Commerce Department. Orders grew for the 10th time in 11 months following a 0.9% setback in February. Gains were widespread among manufacturers except for makers of aircraft and computer parts. March marked the fifth month in a row that orders exceeded the pre-pandemic level. They were up 10.9% from March 2020. Core capital goods orders, a proxy for business investment, rose 0.9% from February and were up 10.4% from March 2020.

An imbalance between limited supply and rising demand continued to drive the year-to-year increase in residential prices in February, according to the S&P CoreLogic Case-Shiller home price index. The 20-city composite index rose by 11.9%, the most in seven years. Gains were broadly based but rose most in the West and Southwest. Housing prices are far outpacing overall inflation, with the core Personal Consumption Expenditure index up 1.4% from February 2020. Home price acceleration began in August 2019 and slowed only in April, May and June of last year for the pandemic-induced recession. 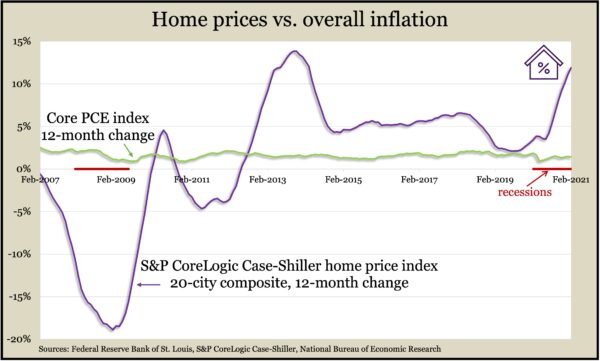 The Conference Board said its consumer confidence index rose in April to its highest level since before the pandemic. Assessments of current conditions “soared” according to the business research group, which should further strengthen the economic recovery in the second quarter. Consumers were upbeat about income prospects because of an improving labor market and the latest round of stimulus checks. Inflation expectations remained elevated, and more consumers expressed intentions to take vacations.

The U.S. economy rose at an annual pace of 6.4% in the first quarter, though on a full-year basis, inflation-adjusted gross domestic product was up 0.4%, according to the Bureau of Economic Analysis. Real GDP remained 0.9% below its previous peak at the end of 2019. Consumer spending, which drives about two-thirds of economic activity, advanced at a 10.7% annual pace, fueled by government subsidies and the reopening of many businesses amid some lifting of pandemic precautions. The Federal Reserve Board’s preferred measure of inflation remained weak, rising 1.5% from the first quarter of 2020. At an annual pace, inflation was up 2.3%. 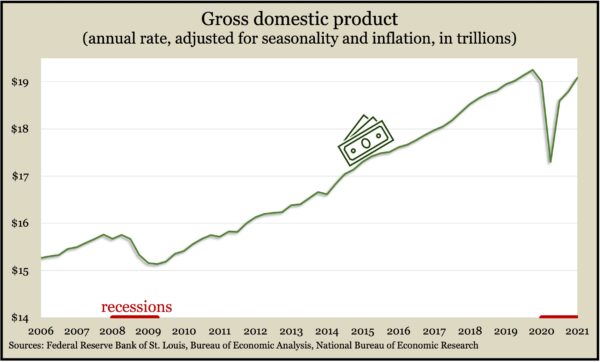 The four-week moving average for initial unemployment claims sank for the 11th time in 12 weeks, declining to its lowest level since the COVID-19 pandemic began. New claims were still 65% higher than the 54-year average, according to Labor Department data. In the latest week, 16.5 million Americans claimed jobless benefits, down from 17.4 million the week before.

The National Association of Realtors said its index of pending home sales rose 1.9% in March, the first increase in three months. The trade group’s index was up 23.3% from the year before, when COVID closings suppressed sales. With historically low mortgage rates and a recovering job market, demand for houses stayed robust amid diminished supply. The Realtors project sales of 6.2 million houses in 2021, which would be a 10% increase from 2020. The group expects the median sales price to rise 9% this year to $323,900.

The Bureau of Economic Analysis said consumer spending rose 4.2% in March, fueled by a record 21.1% jump in personal income, led by federal stimulus payments. Increased consumer spending resulted in an 8% rise in expenditures on goods like automobiles and a 2.2% increase in spending on services, including at restaurants and bars. The personal saving rate rose to 27.6% of disposable income from 13.9% in February. The core personal consumption expenditures index, which the Fed follows for inflation, rose 1.8% from March 2020, still below the Fed’s target rate of 2%.

Often a pre-cursor to spending, consumer sentiment, continued to climb in April, according to a longstanding survey from the University of Michigan. Optimism surged based on a record high belief that the unemployment rate is going to fall, an economist with the survey said. Consumers expect inflation to rise along with an improved economy, although the economist warned that demand might be swelling so swiftly that prices could increase more and longer than policy makers expect.